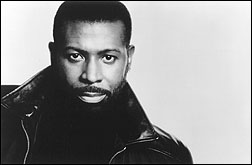 Teddy Pendergrass performed for the first time in 19 years at Atlantic City's Taj Mahal on May 25-26 marking his return to the concert trail. It was his first concert since 1982 when he was partially paralyzed in an automobile accident.

Brothers Management Associates, his booking agency, plans to book Pendergrass slowly in part, due to his condition–he performs in a wheel chair. They are looking at casinos and theaters, the latter mostly in the 1,200-2,000 capacity range.

His next date is July 15 at the Mohegan Sun on a bill with Dionne Warwick. Pendergrass uses Linda Clifford as an opening act; she also sings a solo tune or two during Pendergrass' set when he takes a breather and one to two duets with him.

Pendergrass tours with two keyboardists (one who doubles on saxophone and trumpet), guitarist, bassist, drummer, percussionist, six background singers and a dancer, who is his daughter.