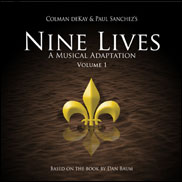 The album, by Colman deKay and Paul Sanchez, is a two CD collection of 24 original songs and features over 100 musicians, most of whom are from New Orleans.

The Nine Lives album is a musical adaptation of the New York Times bestselling book “Nine Lives” by Dan Baum (New York: Spiegel & Grau, 2009). The non-fiction book serves as an oral history of New Orleans in the forty years (1965-2005) between the twin catastrophes known as Betsy and Katrina as seen through the eyes of nine of its citizens.

The album includes the first 24 songs imagined for a theatrical production and is anticipated to become a Broadway musical.

The Nine Lives CD was made possible in part by a $50,000 grant awarded to the Threadhead Records Foundation as part of the Pepsi Do Good for the Gulf program last September.

“We appreciate the work that Threadhead Records is doing to help New Orleans musicians and artists and are excited about the Nine Lives Project,” said New Orleans’ Mayor Landrieu according to a press release.

“The book captures the spirit of our communities and will make a wonderful musical. I’m excited that Pepsi’s generous support will result in an album, and I look forward to celebrating the opening night on Broadway.”

Mystery Street Records, which is expected to quickly emerge as a premier label for Louisiana music, is the new sister label to Threadhead Records, a non-profit label who in less than four years has released 25 records and raised more than $300,000 for New Orleans musicians. Not your typical record label, musician's projects are funded by loans or grants.