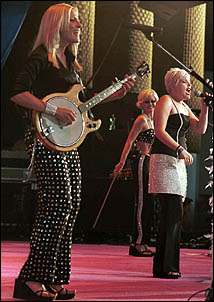 After months of speculation and potential lawsuits, the Dixie Chicks not only have re-signed to Sony Music, but they are also getting their own label, Open Wide Records, to release its music on. The label was formed by the group and Sony Music.
SME's Nashville-based Monument Records and New York-based Columbia Records Group will provide marketing and promotional support for the release due August 27.

"The Dixie Chicks' are three of the most talented artists in music today and the release of 'Home' is sure to be a major entertainment event," said Tommy Mottola, chairman/CEO, Sony Music Entertainment. "I know that the entire Sony Music team is excited to bring the Chicks and their music to a wider audience than ever before."

The Dixie Chicks added, "We are very proud of the music on 'Home.' We recorded it as a labor of love during our time off, and are thrilled it has come together as an album that we think is our best yet. We are equally excited to get the music out to our fans. Our reconciliation with Sony Music couldn't have come at a better time."