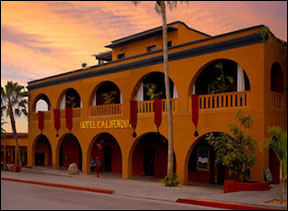 LOS ANGELES (CelebrityAccess) — The Eagles are suing a hotel in Mexico that calls itself the Hotel California, after the band`s hit song and album.

The rock band claim the 11-room hotel, in Todos Santos, "actively encourages" guests to believe it is associated with them in order to sell merchandise.

They claim the hotel plays Eagles songs in the lobby and sells t-shirts describing the venue as "legendary".

"Multiple online reviews make clear" that visitors are deceived, according to the band`s legal claim.

The Eagles are seeking an injunction to stop the hotel from using the Hotel California name, or doing anything else to imply a connection to the band. They`re also seeking all related profits, plus damages and relief.

The band`s legal case argues that Hotel California is "arguably the band`s most popular song, and in many ways embodies the very essence of the band itself".

Coincidentally, the Todos Santos hotel was named Hotel California when it opened in 1950, but went through a series of name changes before a Canadian couple, John and Debbie Stewart, bought it in 2001 and, according to the Eagles, began using the original name in marketing.

Reviews on TripAdvisor show that some visitors believe it is the hotel referenced in the hit song.

The owners were not immediately available to comment on the legal case, which was filed in Los Angeles on Monday.

Hotel California is the title track from the 1976 Eagles album of the same name, and won the 1977 Grammy award for record of the year.

While the song is not based on any particular place, the building pictured on the album cover is the Beverly Hills Hotel.

Ironically, the band used the photo without permission, nearly landing them in court, until it was pointed out that the hotel had seen its bookings triple after the album was released.