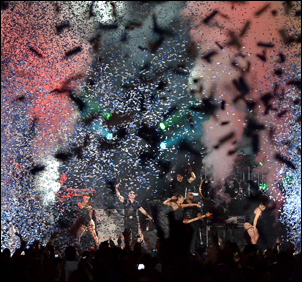 
The inaugural event kicked off Saturday afternoon with the official free pre-event featuring performances by Becky G, Voz a Voz and Taboo from The Black Eyed Peas as well as live sets by iHeartRadio's Prostyle. The afternoon event featured food trucks many partner activations with ways to win tickets to the evening show, exciting artist experiences and more.


Straight from the Forum in Los Angeles, event featured highlights including:

– Ricky Martin opened the show and was spotted backstage before his performance catching up with Mario Lopez about his kids
– La Original Banda El Limón did a special performance of "El Mejor Perfume" with Voz a Voz
– Daddy Yankee opened his sets with his hit song "Gasolina"
– Prince Royce made the crowd swoon as he threw red roses into the audience during his performance of "Darte un Beso"
– Prince Royce hosted a private meet-and-greet with two Make-A-Wish families, spending time with them backstage in his dressing room. The families were also able to spend time backstage during Becky G’s performance at the iHeartRadio Fiesta Latina La Villita
– Pitbull closed the show with an over-the-top performance of some of his biggest hits, including "Give Me Everything Tonight" and his new hot single "Fireball"