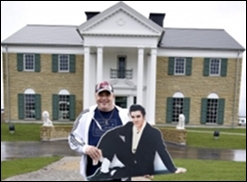 The Danish tribute to the King has been built in the town of Randers and will be known as Graceland Randers.

The building is almost identical to the original, although it is twice the size to house a shop, restaurant and museum.

Nearly 6,000 Elvis items, from guitars and letters to clothes, will be on display. Organisers hope to attract at least 50,000 visitors a year.

Tourism officials in Randers believe as many as 125,000 Elvis fans could make the trip annually.

The building is the brainchild of Henrik Knudsen, an Elvis fan who has run a museum in Randers for the last 16 years, which already attracts 25,000 visitors a year.

He said the project has the backing of Elvis's widow Priscilla.

"I had the chance to meet her in January 2008 and I talked to her about the project and everything, and she signed a very nice picture to me on which she wrote: 'To Graceland Randers, Priscilla Presley,'" he told the BBC.

"She said that Elvis was a very shy guy and he wasn't really that secure of himself. She believed that if Elvis had the chance to see this today he would be very proud because he wasn't sure that next year anybody would care about him."

Doors are now officially open to the public, with a ticket price of 95 kroner (£11).