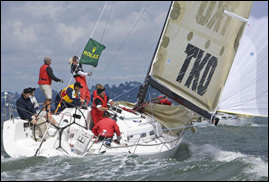 SAN FRANCISCO (CelebrityAccess MediaWire) — "It was the most exciting regatta I have ever sailed. It read like a movie script" said Dave Kirby, president of TKO / The Kirby Organization.

Dave went on to relate his sailing experiences:

"I had decided it was time to flip my J/120 and get a new J/122. The Big Boat Series is the biggest yacht racing event on the west coast and I was bound and determined to be ready to do it this year. The boat is made in France, shipped to Bristol, RI, where the keel and rudder are put on and then trucked across country to Newport Beach CA, where the final commissioning is done, the mast is assembled and installed and the electronics are installed. The boat arrived in Newport Beach and they put 5 guys on it, working 12 hour days to get it ready to leave for San Francisco."

The delivery guys took about 4 days to do the 500 miles, north to SF.

"We have a 10 person racing crew on TKO. Adrian Vallera, the manager of 10 YEARS is my mast man and although he just started sailing 2 years ago, he has really come a long way fast and he is now one of the best."

"On the second last day of the 4 day series, we had already won the first race and were all talking about how we had the regatta in the bag and just needed to make sure we didn’t make any mistakes. We were about 1 minute and 30 seconds away from the second start, it was now blowing 22 knots and we were heading away from the line at about 9 knots. I spun the boat to take our final approach and when I stopped the boat…Adrian kept going. A split second later, I looked down beside the port side of the boat and saw a clump of black go by…that was Adrian's back. A moment later, his head popped up (thank goodness) …we took one run at him and missed…we got him on the second pass and pulled him in the open transom. We then pushed to

the starting line and crossed, approx. 3 minutes after the rest of the fleet had started. We then fought our way back through the fleet and managed to cross in 3rd. We got 7th on corrected time…good enough to be tied for 1st, going into the last day of racing. Wouldn't you know…it all came down to one race…the Tour Of The Bay Race long distance race. We won the race by 20 seconds and the regatta by 1 point!! Yikes…somebody give me my heart medication."


We love to hear about what our customers are doing, whether it be the high sees or the desert. If you've got an interesting story to share, drop us a line. –by CelebrityAccess Staff Writers