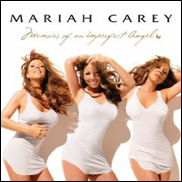 And they wonder why no one wants to buy them.

It’s bad enough that CDs are antiquated and overpriced. But now you want us to pay to be bombarded by advertising? Hello?? Doesn’t anybody at Island Def Jam read? That people, especially the younger generation that buys the beat-infused music Mariah Carey now makes, are completely off advertising? In a world of Tivo and Facebook, where consumers/surfers/customers only consume exactly what they want, IDJ is gonna try and shove crap down people’s throats, and make them pay for the privilege to boot?

And it’s not only the physical CD booklet, you get the same crap when you buy digitally! Which is like going to an artist’s website and being bombarded with pop-ups! I’m

surprised IDJ doesn’t require you to cough up your e-mail address so they can spam you forever. Hey, why not make a deal with a spyware company! Every little bit of revenue helps!

It’s one thing if you’re giving this crap away. Quite another if you want us to pay for the privilege!

But Google makes a fortune with advertising! Yeah, which cannot only be easily ignored, off to the side of the page, but is directly targeted to the audience. And, in case you forgot, search is free. This plot is like having to pay a dollar for a Google search and having to click on

each and every ad that appears on the side of the page to get the results!

If you’re out of work do you go rob a bank?

No, that’s illegal. Technically, ads in CD booklets are not against the law, but they’re almost equivalent. If you can tell me how an ad in a CD booklet enhances the listening experience, I’m all ears. And speaking of ears, isn’t that what music is made for? Ears, not eyes? Have we completely forgotten this?

What world is IDJ living in? Instead of making better music that more people want to buy, instead of trying innovative ways to get the audience to cough up more money for what it wants, they’re acting like they’re omnipotent, entitled to do whatever they want to make money, damn the customers.

I truly thought this was a joke. Like something you read in the "Onion". Who comes up with this shit?

The Monetization of Mimi: Mariah CD To Have Ads