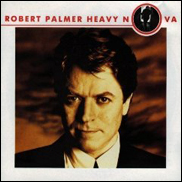 "Addicted To Love" is a pretty good record, but if you want sheer magic, you’ve got to go further back into Robert Palmer’s career, the first two solo records, when no one was paying attention.

I bought the second one first. A promo. The torrent of its day, even if you did have to actually pay something for the disc. I got hooked on "Give Me An Inch". And loving this blue-eyed soul number so much in an era when white men crooned little, I went back even further, to Robert’s debut.

There’s a band touring today known as Little Feat, and Billy Payne is still fantastic, but that act is a shadow of its former self. It’s like Big Brother without Janis Joplin. You see, Lowell George was Little Feat.

And the George-led Feat was like Palmer, laboring in near-obscurity before breaking through. But on that second Little Feat album, the one with Neon Park’s piece of cake swinging on the cover, the one that opens with the legendary obscurity "Easy To Slip", on side two, you’ll find the title track. An exquisite, laid back Lowell George concoction.

"Sailin’ Shoes" opens Robert Palmer’s solo debut. This is like finding out your grade school girlfriend is the new Mayor of Philadelphia. Only you knew her previously, you knew she was special, she was your secret. It’s good to know someone else feels it too!

But "Sailin’ Shoes" doesn’t fade out into blankness, it segues into "Hey Julia", and that track segues into "Sneakin’ Sally Through The Alley", written by Allen Toussaint, but unknown by me when I purchased Palmer’s debut disc.

"Sneakin’ Sally Through The Alley" is like getting together with your college buddies, it instantly fits, it makes you feel good. Every time you hear it it puts a smile upon your face.

Last weekend at the Gorge, Phish played "Sneakin’ Sally Through The Alley". As well as a twenty three minute version of the Velvet Underground’s "Rock and Roll".

If your act is on hard drive, you can’t change the set. Ditto if you’ve got a ton of choreography. Modern shows don’t breathe. They’re spectacle, but frequently not music. A concert should be a

one time only event, unique to this night, an evanescent experience that you’re privileged to attend.

I’d be lying if I said I was the biggest Phish fan.

But they don’t rely on covers, they insert them like strategic attacks, revealing their roots, evidencing years worth of listening to records. Unlike the teen phenoms and their audiences, Phish wasn’t born yesterday, they’re part of an enduring legacy, and this endears them to their fans.