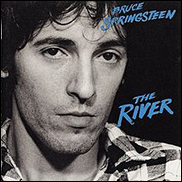 Unlike back in '81, I had a phenomenal seat. And standing by the stage was a guy with a thick neck and greased back hair sporting an upper body built big in the gym and tattoos upon his back and arms. He was a Jersey guy.


Live long enough in Los Angeles and you forget all this.


But I remembered it Thursday night.


Bruce Springsteen has a bump in his nose, his face is cute, but mere feet away you see he's a misfit, who channeled his desire and talent to success which soothes him but never satiates him. Because he's an outsider.

Who lived in bars and practice halls with a dream in his sights that few could understand.


That's where the music lived, in bars. You did covers and a few originals. The patrons got drunk and tried not to fight. And you honed your chops and got high and got laid and other than having no bucks you were living the life.


Not that you thought it was forever, it couldn't be forever, you had to break through.


And Bruce Springsteen did. He became a star relatively early in his tenure. Got married, went to the shrink, got divorced, had a family and is now out on the road reliving the glory days.

I'm too old to do all this. I didn't have children. I can't go for a victory lap when I've had no success.


And all of this went through my mind watching the Boss at the Sports Arena. My life slid by. People my age are thinking of retirement.


But once upon a time we were the youth, we were the cutting edge, there were no social networks, cell phones were a "Star Trek" fantasy, we had to leave the house to connect, to feel alive, and where I felt the most comfortable was at the show.


It was completely different. No one stood, except for maybe the encores. There were seats. You didn't go to be seen, you went to communicate with the music, bond with the gods.


And it won't ever be that way again.


It can't be. Mystery is history. You can see it all online. And scarcity is a thing of the past. You laid down your money for "The River" and it's all you listened to for a week, maybe longer, because it's all you could afford, and you wanted to digest its truth.


And the highlights Thursday night were the slow songs. Most notably "Independence Day," but also "I Wanna Marry You," never mind the title track, "The River." You sat there transfixed…how did I get from here to there, I avoided so many potholes, but a few I fell in, a few I never recovered from.


But the band kept playing on. That's what musicians do, play. Stardom is a byproduct, at best.


This was a tunnel to the past, exuding a certain amount of love, but there was no pretext that Bruce Springsteen still mattered, was still hip, was still ruling the charts. By playing "The River" complete and a bunch of hits not only did Bruce give the audience what it wanted to hear, he could be loose, he had nothing to prove.

Other than he was the best damn rock star on the face of the planet.


That was the scary part. After the two hours of "The River" the Boss did an hour of hits and…he started out at 11 and stayed there. I can't say a negative thing about it, it was positively thrilling, it's how he built his career, but I couldn't help thinking what a screwed-up guy he was, that he needed to do this, he had us at hello, when he took the stage, never mind went into "The Ties That Bind."


But at this point, deep into the show, the audience was no longer individuals but a great big mass, you see Bruce was in a trance, he was home, in his element, it was what he lived for, he was gonna give us that high and get one in return.


No one does this anymore.


Because no one's done that many dates. And what we consider a star is far different from who Springsteen was and is. Springsteen is Sally Field, he can't believe everybody really likes him.


So you're listening to "The River" remembering what once was. Before Bruce danced in the dark, when he was just another guy on the FM with a hit who was soldiering on, when our albums were our most treasured possessions, when we knew every word because we'd heard them so much.


And it was astounding how everybody sang along, especially on "Hungry Heart," a second-rate tune on an A level album. But "Hungry Heart" was the hit, so the assembled multitude could sing the entire first verse without Bruce's help. Hits still rule, they're the anchor upon which you build your career.


But it's when Bruce played "Badlands" that the building started to levitate. This show was really for fans, and in my mind it's a toss-up whether the second album or "Darkness" is the best.

And although the band also played "The Promised Land," the first highlight of the encore section of the program was "Backstreets," that's when heads started to explode, because there's nothing like hearing live songs you know by heart, ones that make you forget all the detritus in your life and just feel good, and seeing Bruce and his compatriots channel the gods made you feel good.


And they did "Rosalita." Even "Dancing In The Dark."


But one of the thrills of the show is having songs you liked but didn't love get elevated to iconic status, you understand them in ways you previously did not, and that happened with "Tenth Avenue Freeze-Out." As exuberant as the number is, Bruce was denied. We've all been denied, we've all been on the losing end.


But we just put on another record and soldier on.


The hero of the band, its driver, the underpinning, the one who holds it all down, is Max Weinberg. He may not have a good rep, we've all heard the stories of what went down at "Conan," who was there by the way, along with a slew of other luminaries, but to watch this sixtysomething pound the drums and keep the beat for three plus hours was a revelation, he was the one element the band could not do without.


Other than Bruce himself. Who kept us marveling that he was still doing this act at 66. Jumping up and down, clowning and cajoling. Single-handedly proving that rock and roll is still alive, even if it might sometime die.


And the rest of the players showed their age, not in their playing, not in their performance, but their mugs, their hair, their countenance. They're lifers, this is all they can do. In the seventies they were kings, amongst the richest in America, now they're paupers compared to the bankers and the techies but…they don't care, they're just strumming and smiling all the while.


As were those in attendance.


This was nothing other than what it was billed as. Like I stated above, there was no pretense that this was young, relevant and hip. This was just what it always was and forever more shall be.


The first generation of classic rockers is dying off.


The second is starting to show wear and tear.

And at some point in time there will be no mas. The records will live on, you'll be able to hear them, but you will no longer be able to go to the show and experience the magic of what once was. Hell, the E Street Band has holes in it, illness and death have taken their toll.


We're a nation of individuals. Searching for connection. Looking to feel we belong.


And on Thursday night I felt I was part of a vast continuum, of misfits who'd lived for the music each and every day. Who knew all the players, the producers and the engineers, who needed to get closer, who considered the venue their church and those on its pulpit their priests.


Bruce Springsteen is just a vessel. He's channeling commitment and desire and anger and frustration and laying them all out for us to explore and experience.


And what you're left with is a performance.


And Bruce Springsteen and the E Street Band blew us away Thursday night.


They'll tear the Sports Arena down. Not everyone will see the band again.


But we'll all remember.


When fifteen thousand threw their hands in the air and said…


I LOVE ROCK AND ROLL!