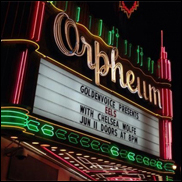 It was wasted on the Eels' audience.


But there's pure joy in those words.


And there was pure joy in the Orpheum tonight, when Steve Perry returned to the boards in Los Angeles and delivered an arena-sized performance.


You forget that these guys have experience. That they've played the big rooms. That they started out rusty and developed chops. And Perry exhibited all of his experience tonight!


I'll be honest, I knew he was gonna show. Otherwise why go?


I'm not saying I'm not an Eels fan, I love "Jeannie's Diary," it's just after decades of life I only want to go if I get that jolt in my arm, that injection that obliterates all my worldly concerns, that jets me right back to who I was at sixteen, sitting in my bedroom in the dark, listening to the music on headphones.

And I never went to the show to ogle the girls, to tell anybody I was there, but to connect with the music. It was the only place I felt whole. The venue was my synagogue, where high priests delivered the sermon that truly spoke to me.


And I was not a Journey fan when the band ruled, but I know all the songs, they were played incessantly back in the day when the radio was your only true option in the car, sure, you played cassettes on a long trip, otherwise you wanted something new.

But that was back when music ruled the world. When it was seen as the preeminent art form. Before nitwits like Iggy Azalea ruled and a big hit song was entitled "Wiggle," back when there were two avenues, the mainstream and the underground, and the true music fans were members of the underground, forget all those pop charts, no one listened to hit radio back then, we all smoked dope, grew our hair and dedicated ourselves to the slow-talking deejays on FM.


Then Lee Abrams codified the playlists. But bands amped up their tunes. You may decry Boston and Journey, but they put out professional records which satiate even more now as a result of the dreck that dominates today's airwaves.


You know that Filipino guy in Journey is pretty good.


But he's not the real thing.


The real thing sang tonight at the Orpheum, and it was MINDBLOWING!


Forget the YouTube clips, forget the fact that his voice wasn't perfect in Minneapolis, if you were there you would have grinned from ear to ear, if his audience had been in attendance heads would have exploded, a la that SNL clip wherein Oprah gives stuff away.

And I thought of Oprah during the show. Because she does live gigs. She doesn't need the money, but she needs the hit, that feedback you get from the audience, and that's why Steve Perry did it tonight.


He sang an Eels song.


And then he told a tale. Of writing a song in L.A. and being called by a band up north and rewriting it so it was localized to the city by the bay. Yes, Steve Perry sang LIGHTS!


When the lights go down in the city…

And what was most amazing was it was him. His voice, his timbre. And he could still sing when so many of his contemporaries cannot. I love Elton John, he's one of my all time favorite artists, but his voice is far from what it used to be, all that's left is huskiness, too much huskiness.


And Billy Joel sing pretty well. That's why he's getting his victory lap.


But Steve Perry's been gone for twenty years. For him to sing is like having Mickey Mantle come back from the dead, kick the dirt from his cleats, smile at the stands and then hit one over the fence.


Because that's what Mantle did.


Steve Perry did what he does tonight. He emoted, he reached out and grabbed the audience, he gave a performance. One that was based not upon dancing or set decoration, but purely the music itself.


He told stories, he sang to the heavens, he touched me.


And I'm not gonna listen to a single person say a negative word about it.


No, not gonna happen.


I'm gonna delete the e-mail that says he can no longer sing. That laughs at me because he fronted Journey. The ones that denigrate me and Steve in order for the writer to feel better about him or herself.


That's what's wrong with America today, everybody on the sidelines saying they can do better when they can't. Unwilling to take a risk, not knowing how hard it is to not only make it, but to sustain.


I mean I'm in the audience, moving closer and closer, because I need to merge with the experience, jump inside, get further taken away to the place I once lived in and am yearning to return to.

What we all want is hope.


And I refuse to give it to the wannabes without talent.


But when someone who reached the pinnacle returns without pretense and blows me away, I can only say…


P.S. He was an engineer. That's the dirty little secret of those who truly make it. They know they may not. They pursue alternatives, because no one knows if they're truly gonna get their shot, whether they're ever gonna break through. And he comes home and his girl's not there. And this is unusual, this is strange, he doesn't want to be uptight, but he is. So he sits by the front window and… She gets out of a Corvette. And as only Steve could put it, she and the driver LOCKED UP! And when she walked inside, she denied every little bit of it, said Steve was dreaming. And that's when Steve Perry wrote "Lovin', Touchin', Squeezin'."


"You make me weep and wanna die"


What do you do when you feel this way? PUT ON A RECORD! And what makes those records so damn good is the people who create them have had the same damn experience, only they've written about it. We bond with the humanity, the truth. And the truth is I've got no idea where Steve Perry goes from here. But to watch him ply the boards at the Orpheum was to see a giant amongst men, to see someone world class inhabiting the neighborhood, someone with the ability to reach out and grab my heart and sacrifice it on the altar of rock and roll.