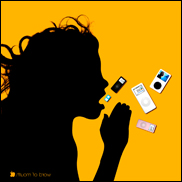 Distribution is king. Remember that please. He who owns the pipe wins. It's why John Malone is so rich and powerful, to the point where one can argue HE is the most important person in the music business, owning so much stock in Live Nation. Distribution is not glamorous, but it's where the action is. Let me make it simple, it doesn't matter how good your album is if no one ever hears it. The major labels were in charge of getting music made and heard. That monopoly on distribution is gone. THAT'S why they're in trouble, not P2P theft. The Internet broke their hold on distribution.

The reason major labels survive to the extent they do, other than their trove of copyrights, is their control of distribution on terrestrial radio and television. You cannot get a record played on a major station unless you're on a major label. Insiders know that the Spitzer crackdown actually made the result worse. And television wants gatekeepers, channels don't want to deal with every wannabe in the world, they want to be spoon-fed acts that will be supported, that will make a splash in the media, they don't want to be caught out on a limb. Alone. Which is why you rarely see the cutting edge on TV. The mainstream is a club, it's not about taking risks.

Then again, I was out with a major label publicity person and a powerful indie and they both said that late night TV gives no bump whatsoever. Used to be there were few shows many watched that featured music only occasionally. Now music is on constantly and no one cares. There's no sales bump. You want a spike? Go on Sunday morning television, they say that still has power.

But the main power of the major labels used to be the control of retail distribution. They could get records in stores and could get paid. And if you think either of those are easy you live in a fantasyland where your eight year old just got GarageBand and you believe he'll be a world-dominating superstar in three months.

But the Internet killed the major label distribution stranglehold. Anyone can sign up with Tunecore and get their music on iTunes. ANYBODY! Sure, the music won't sell, except to family and friends, but it's what this represents that's important. Access and the ability to get paid. The power has shifted.

As for terrestrial radio…it means ever less. Same with TV. You can thank technology, most especially the Internet, for that. People watch what they want when they want. The days of sitting in front of the TV seeing what's next are heading towards extinction, killed by the DVR and online access.

And speaking of TV, all of the above is inspired by a fantastic article in "The Atlantic" about Netflix. About its distribution power. How content creation does not scale, how that's not where the money is. It's long, and it can get boring, but I recommend it:

So the major labels aren't coming back. Never ever. Don't pay attention to the hype. Sure, they can make superstars of the bland playing to the masses, but most people just don't care. And the action is in the rest of the morass, the amalgamation of all of the indies.

I'll make it simple. iTunes is distribution. Apple creates and sells no music. It's just a storefront, a pipe. But look at Apple dictating to the labels, look how powerful Apple has become. Hell, Apple not only killed record stores with iTunes, but the CD with its iPod!

I can't tell you exactly where we're going. Oh, I could, but I'd be wrong. Because you just can't predict the future. But I will tell you that more people will make music, because the barrier to entry is so low. And that he who can connect the public with good music will be very powerful. So powerful he can dictate to the creators. That was the power of MTV. They owned the pipe. The major labels don't want to give any entity the REVENUE of MTV. They should worry more about giving a new entity the POWER of MTV. Because first comes the power, then comes money.

Look at Vevo. It's distribution, but not only does it lose money, it fails to aggregate all the indies. That's YouTube's power. YouTube is where you go to see videos. YouTube is a distributor.

So never ever believe content is king. Howard Stern would be irrelevant if no radio station aired him. Then again, before re-upping with Sirius XM, Howard contemplated distributing his show himself. That's now possible. That's why radio is in trouble.

And who's got a ton of power? THE CABLE COMPANIES! THE WIRELESS COMPANIES! THAT'S WHERE YOU GET YOUR INFO! THE INTERNET FLOWS THROUGH THEM!

Pipe is not sexy, but pipe is where both the money and the power are.

But those who deliver the content truly have all the power, make most of the money.