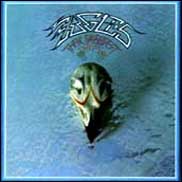 They were so young.


The Eagles are one of the most hated bands in history.


Because they were successful, and they took themselves and their music really seriously. That's not how you're supposed to do it in rock and roll. You're supposed to be on a lark, you're not supposed to care, it's all just supposed to happen. You luck into hits, blow all your money and thrust your arms in the air when it's all done, in an expression that says "What the hell!"


But it don't really happen that way at all. It's really hard to make it. Not only does it require patience and perseverance, talent and dedication, it demands mental energy. Can you handle it? All the scrutiny, all the expectations?


Randy Meisner couldn't. He just wanted to be one of the guys. He didn't always feel like singing "Take It To The Limit," he wasn't always up to singing the high notes. But Glenn Frey demanded he perform it. Because the audience EXPECTED IT!

You're not supposed to care about the audience. But they pay their hard-earned money. And if you don't deliver, not only will they be disappointed, they probably won't come back. And everybody knows the money's in repeat business. Having enough albums to get a better deal. Enough hits and good vibes to play bigger places at a higher price.


Do you think that's easy?


Then you probably believe money grows on trees.


The documentary starts with roots.

We all come from somewhere, it defines who we are. And in the pre-Internet era, we were all extremely localized. You could be popular in your own high school, but in the next town over, you were unknown. The road to stardom was strewn with potholes and blind turns. You just had to get behind the wheel of the car and keep driving.


Where the American Dream reaches its zenith. Today in Silicon Valley. Yesterday in Los Angeles. Prior to the sixties in the movie business. But for fifteen years thereafter, from '65 to '80, the music business ruled. Musicians made more money than actors. They followed their own muse. And the audience paid attention, their only desire to go to the show and get backstage.


Yes, do you think twentysomething boys played their music and went home to watch TV and read books? OF COURSE NOT! The first night Irving Azoff spent with the band on the road they didn't even bother checking into the hotel. They went straight from the gig to the party. In this pre-AIDS era sex was rampant, as were the drugs. The life of a rock star was the apotheosis.


And no one lived it to the fullest like the Eagles.


Of course we had Led Zeppelin. But they weren't American. They were dark and introverted. Whereas Glenn Frey was all about fun. Let's RAGE!


So the film begins with the band onstage.


You've just got to see them walk, with their guitars over their shoulders. This is deadly serious work. And they're up to the task.


I feel sorry for those of you who grew up in the era of MTV. If you want to know what it was like before television taught us how to behave, see this movie. There's no dancing, no production, no special effects. Just music. AND THE AUDIENCE IS LOSING ITS MIND! The music was enough. MORE THAN ENOUGH!


If you were there you'll tingle.

If you weren't, you'll lament you were born too late.


So Don Henley is a drummer in Texas with chutzpah. He implores Kenny Rogers to come see his band and the singer ends up producing their album for Amos Records. Hell, just the footage of Kenny singing " Just Dropped In (To See What Condition My Condition Was In)" will thrill you.


This was not only the soundtrack to our life, this music WAS OUR LIFE!


The Beatles started it. In one fell swoop they made every baby boomer music crazy, everyone picked up a guitar, everyone played, music was all we talked about. Steve Jobs started Apple Computer, but it was Bob Dylan who he put atop a pedestal.


Glenn hooks up with J.D. Souther and they form Longbranch Pennywhistle. They end up befriending Jackson Browne and move in above him in Echo Park. Where at nine every morning Jackson makes tea and starts to write. Playing the same riffs twenty times in a row. THAT'S WHAT IT TAKES TO MAKE IT! You don't see the hard work at home, only the result, but the dues being paid are hefty.


And they're hanging at the Troubadour. Henley saw Elton's debut. You see back then, we were all fans. We didn't want to hang out with bankers, we wanted to get closer to the music.


And Glenn and Don get gigs backing up Linda Ronstadt.


You should see her in this flick. She's eloquent and sexy…she's a STAR! And she plays the guitar! Today our females are too often pinups, Linda was all about the music.


And then the band signs a bad deal with David Geffen and moves to Aspen to rehearse. And try to get Glyn Johns to produce their record.

Whew! We never see the behind the scenes people. We certainly never see the tension. Glyn was a martinet, he thought the Eagles didn't rock, it took three albums for the band to stand up to him. Hell, today most acts don't even get three albums!


And they end up switching to Joe Walsh's producer, Bill Szymczyk and they mic every drum and suddenly…they're the biggest band in the land.


But then they push it further. They record "Hotel California."


And it wasn't only that track. "Life In The Fast Lane" became an anthem, an aphorism heard all over the country. Before we quoted rap lyrics, everybody was referencing the Southern California lifestyle evidenced in Eagles records.


And Bernie Leadon goes his own way.


And Don Felder pisses off Glenn Frey, they just about come to blows and the band is done. Just like that.


Oh, they eked out "The Long Run." But they were running on fumes. They'd given it their all. You can run the factory 24/7, do a bit of maintenance and it'll run forever. But not people. They get fried, their creative juices run out. They burn out.


But the music remains.


The Eagles have the best-selling album of all time.


And people hate them for it.


Like a college dropout hates a banker, a tech titan.


But do you want a college dropout performing surgery on you?


NO! You want the most qualified doctor available. Not only an M.D. with a long CV, but the one who never makes a mistake, who operates on the famous people, the first call.


And that's what we want in our music.


Denigrate the Eagles all you want. But the proof is in the grooves. And the attendance decades on. Hell, you don't have to like the music, but if you don't give them respect you probably think Obama was born in Kenya and didn't graduate from Harvard.


Ain't that America, the land of sour grapes.


But also the land of hopes and dreams.


Two sons of factory workers emigrate to California and live the American Dream. Right or left, Republican or Democrat, that's what we're all looking for. A better life than our parents, the fulfillment of our dreams.


Want to know how it's done?