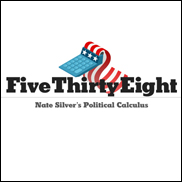 
You know, the nerd in the "New York Times" who called the election, trumping all the bloviating blowhards on television who think a fact is something you make up.


So you just don't care.


Because Nate Silver is a superstar. He's the model for tomorrow's musical acts, but you just don't know it yet.


Unlike today's adolescents dominating the YouTube, SoundScan story, Silver wasn't born yesterday, as in he's got a history. Not only is he educated, he did stuff before the "Times," which signed him and where he ended up so successful he pissed everybody off.


Jealousy… That's the heart of the baby boomer story. And now Gen X'ers, who are finally pushing fifty, too. They created the world and they believe they own it, but they don't.

Now if the "New York Times" had a television network… Then it might have had a chance to keep Silver. But the paper couldn't compete with the ABC/ESPN duality. As for print? Who needs it, when you've got the web? Yes, Silver holds on to his FiveThirtyEight.com domain, he's the star, not the paper.


And this goes against everything we've learned in mass media for eons. This is the oldster's worst nightmare. Because suddenly, talent is doing it for itself.


This is the story of Arcade Fire. Personally, I don't love their music, but enough people do. Same deal with Nate Silver. Not everybody knows his name, but enough do. That's the goal. To amass your audience and triumph.

That's what you could never do before. Build and own your audience. You were dependent upon middlemen. This is what is wrong with the major label model of today, they take all your money and give you very little in return, telling you that without radio and their relationships at retail, you just can't succeed. But if Nate Silver can succeed without the "Times," can't you?


Now let's start at the beginning. Not everybody is as talented as Nate Silver. Yes, I know you hate that, you were taught by your parents that you were great and if you just believed in yourself you would succeed, but this is categorically untrue.


And as stated earlier, success is dependent upon education and hard work, something that's abhorred in Snookiville. Today's wannabe musicians can make great YouTube videos and social network and spam you to death, but they rarely make great music.


And Nate Silver has confidence. This is something that's been evidenced by great musicians from John Lennon to Elton John to… They weren't blowhards, telling us they were great, it's just that they weren't all humble and touchy-feely, they radiated an inner strength we were drawn to, as opposed to a modern "musician" who drapes himself in diamonds and then declares bankruptcy.


And you always start off far from the radar screen. That's what today's wannabe musicians don't get. Recognition comes LAST! Be happy to play the gig most people don't go to, that's where you hone your chops.


And ask for more. This is what people hate about the Eagles, their confidence and their demands, their desire to do it their way. People would rather drag you down into the hole they're in, they want you to apologize and make like you're just like them. But I'm certainly not a statistics whiz like Nate Silver and I doubt you are either.

Now granted, Nate Silver did not go totally independent, unlike the delusional Andrew Sullivan, who believed by tapping his audience for cash he'd grow instead of being marginalized. In other words, there's no harm in selling your wares to the highest bidder…as long as it is done on your terms, not theirs.

On the cusp of new superstars. All the oldsters were built by the old system, yes, even Radiohead, certainly Coldplay and Dave Matthews, they benefited from MTV and VH1 and radio airplay when it truly meant something. As for today's YouTube stars… Justin Bieber is self-destructing before our very eyes. It's a much more riveting performance than his music. But soon we'll have more Arcade Fires, and some of them will have mass appeal. Tom Petty's lyric about the label not hearing a single will make about as much sense to the younger generation as the skips on a vinyl record. Huh?

Because distribution is free.

But in order to truly be king you have to believe in yourself and play by your own rules.

Disruption is continuing in the music sphere. Because the old game continues to wane. SoundScan numbers tank and are almost completely irrelevant, one wonders why Jay Z even cares.

Offer him exposure in all venues.

Cut him a great deal.

And know that he's boss.

If you're not kissing the ass of talent, if you're not giving it all it wants and deserves, you're destined for the scrapheap.

P.S. Silver graduated from the University of Chicago, where you can't take business courses and internships don't give you credit. It's a hard-assed experience most would shy away from, even if they could get in.

"Nate Silver Went Against the Grain for Some at The Times": http://nyti.ms/13ZekhH