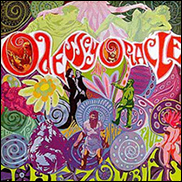 It was a religious experience.


Used to be it wasn't a show, but a concert. You know, the kind your parents went to, where you sat down and let the music wash over you, let your mind drift into a special place you could not reach anywhere else.


Venues were temples. Places you went to connect and commune, recite the liturgy and be transformed. What you wore was irrelevant, it was about how you FELT!


And it was that way again Saturday night.


It should not have been this good, it shouldn't have been this meaningful. It's not like the Zombies have disappeared, or that their music is inaccessible. But indoors, as opposed to their last gig in L.A. on the Santa Monica Pier, the whole performance had gravitas. Everybody paid to get in. And when you're playing to the faithful there's an energy that's palpable. The band feeds off the audience and vice versa.

And that's what it's supposed to be about.


It was Colin Blunstone's voice that lifted the congregation. At age seventy most singers have lost a step, but when Colin held the notes in "I Love You" the assembled multitude levitated. This band came to play. The musicians might have been old, but this show was surprisingly sprightly.


As evidenced by the multiple new cuts the group played. Which were curiously satisfying.


But not what we came to hear.


We came for the hits. We came to be jetted back to a past when music ruled the world, when we were locked up in our bedrooms believing that if we just listened hard enough, our lives would change.

And they did. Because the tunes provided a way to communicate, a bond that brought us together.


Now the Zombies were there at the beginning, part of the British Invasion. And even they were anxious about their acceptance in America. Wet behind the ears, they felt inferior to the legends they shared the stage with at the Brooklyn Fox, at Murray the K's Christmas spectacular.


But the band got accolades. And then they broke up. And their career was revived and their legend cemented when Al Kooper plucked "Odessey and Oracle" from the dustbin and midwived "Time Of The Season" into a hit.


And that was the linchpin of this event, a full rendition of that legendary album. With the original band. Sans Paul Atkinson of course, he's deceased. But Hugh Grundy pounded the skins and Chris White picked the bass and it was like your high school reunion, only these were truly the cats.


Grundy was wearing a Neal Peart cap and playing with a studious joy. He needed to get it right, but you could tell he was thrilled to be on stage.


White looked like he'd just finished up at the insurance brokerage and watching him perform created cognitive dissonance. But once you've got the music in you, it's there for all time.


But the original four only played the second set, "Odessey and Oracle."


The first half was the new band, with Blunstone and Argent and Jim Rodford, the 74 year old wonder who anchored those midseventies Kinks records. That's right, when arthritis has sidelined a generation, when television is more important than music, this guy from the Mother Country never gave up hope, he didn't stop believing, he might not look like a modern rock star, but as he mouthed the words to the songs he didn't even sing Rodford was an inspiration.

And those who were there will remember that Rodford also anchored Argent.


And the band played "Hold Your Head Up." And Rod Argent told us that the song was cowritten by the bloke soon to take the stage, Chris White rescued the riff from obscurity, and if you were alive in '72 you remember the track dominating the airwaves. And the chorus is memorable, but it's that keyboard intro that satiates, and when I heard it Saturday night, that twinkle, I was brought right back to the New Raghadan Hotel in Jerusalem, where I listened to it as I tried to sleep in dirty sheets.


Six plus minutes long, "Hold Your Head Up" is an anthem. Like "Stairway To Heaven" and "Free Bird." Part of the rock canon after we switched allegiance from AM to FM and music ruled the world.


"Odessey and Oracle" brought back memories. Sitting as the band played all the notes I was taken back to an era when music was about exploration, if you weren't moving forward you would be forgotten. This was the Zombies' opus, which ultimately fell flat, but back then our icons took risks. Hell, remember the Stones did "Satanic Majesties"!


And Rod and utility player Darian Sahanaja tickled the ivories of their respective Mellotrons, and the music drifted over me and I experienced what once was and will never be again.


An era when music enraptured an entire generation and untold riches rained down upon those involved. When you had to leave home to feel alive, when nothing was virtual and everything was tactile, when songs didn't come and go, but lasted, forever.


It's the alchemy of keyboard, bass and voice. Proving sound counts, yet simple can rule.


"But it's too late to say you're sorry
How would I know, why should I care"

And changes count.
And then comes the anthemic chorus, the personal that becomes universal.


"Well let me tell you 'bout the way she looked
The way she acted, the color of her hair
Her voice was soft and cool
Her eyes were clear and bright
But she's not there"


Oh, pain. Love lost. Feeling sorry for yourself at the same time you feel taken advantage of, unable to see what was coming. We've all been there, it's the nature of growing up, and our experience was encapsulated in song.


The difference between Saturday night's show and those of yore was that Rod and Colin stopped the flow to tell the stories of their career, of the genesis and meaning of the songs. Used to be the acts were silent, too uptight to speak. There was a barrier between the acts and us, which left the bands on an unreachable pedestal.


Whereas Saturday night we were all in it together, there was little charisma, only wonder that we'd all been there.


But many were not. I was stunned how many fortysomethings were in attendance, who hadn't even been born when the Zombies hit.


But that's not only the power of music, but the power of darkness, the power of thought, the power of people. Today it's all about the surface, we judge you by your looks, cash and job. The Zombies hearken back to when the music brought us together and it was enough.


And it was Saturday night.


There was no production. No dancing. No outfits. Music ruled. Because you don't take phone calls in church, you don't talk in synagogue, you pay attention and you have an experience.


And the experience I had Saturday night was one of reflection upon who I was and who I became. Of a time when I had more questions than answers and the only thing that kept me going was the music.


They gave it to us easy with their pleasured hands.


They took us to the promised land.


It was the time of the season for loving.