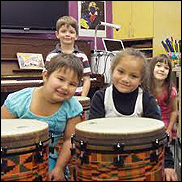 Forget the rubbish about it boosting your brain, the bottom line is if we want better popular music, more people have to know how to play it.


Speak with famous musicians and you'll be stunned how many started in the school band. They caught the bug and stuck with it.


With the evisceration of school music programs has come the decline of quality pop music. In the sixties, not only were there bands, but mandatory music courses wherein you had to learn how to read music.


You don't need a music degree to enjoy music, but you cotton to those with developed skills.


You wouldn't go to a surgeon who watched a medical TV show and you wouldn't want a lawyer schooled in "Judge Judy." Too many seeking fame and riches have only that…or maybe a good body and a good voice too, and that's just not enough.


Television singing shows are a diversion. Some quality people slip through. But they're the cherry on top at best.


Bottom line, you get to the top by hard work, and the focus on ever younger nitwits is not following this paradigm.

With access has come delusion. In other words, if I can put it on iTunes you should buy it.


But if you get a trophy in kiddie soccer do you think you're one step away from Manchester City?


You should play music for the joy of it, for the couple of bucks, not because it's a road to fame and riches. Sure, some people will make it, but most won't.


You realize who's good in math at school, biology, English…if you're not at the top, you find another path, why does everybody think they're at the top in music?


A PLACE TO PLAY


There's nowhere to start out.


Family functions have deejays and the club business died with the record business, when there was no one to support it.


To a degree, this is responsible for electronic music, and that's fine, but just because you know how to turn on the turntable, that does not make you a deejay.


But with nowhere to play, no one can get any good. Your skills might be developed, but your live chops are not extant. I love Lorde's music, but live she's a bore, because she just hasn't developed yet.


Think of all the great live bands, from the jazzers to J. Geils to… They honed their skills off the radar, got good over time.


We've got to get people to hire live bands for family functions. The energy of live can never be replaced by a deejay. But this requires good bands willing to play the desired music at a fair price.


We need skilled producers and engineers to record all these wannabe bands. Right now, compensation is challenged so many musicians do it themselves.


It's true a hit can be heard through mud, but a clear, crisp recording helps people to get hooked.


We've got all the equipment, learn how to use it.


NO WINE BEFORE ITS TIME


This hooks into perspective above. Just because you made it, that does not mean we should be interested. Used to be making a physical disc was expensive, now making an MP3 is cheap so people bombard us with their substandard productions.


If you want to make it, wait until you're ready.


If someone isn't clamoring for the file, so they can spread it to others, then it's not good enough.


Somehow, marketing has trumped the organic spread of music.


Yes, you want people to spread it, but only if they want to!


You want a mailing list so you can reach your fans, not so you can turn them into an army dunning those who do not care.


We live in a pull economy. If people aren't pulling your music, it's not gonna blow up.


We live in an era of marketing, not music. And we're all suffering as a result.

There's a fiction that having everything available means people are interested in it, the so-called "Long Tail."


But the truth is in a Tower of Babel society, we gravitate to that which is universal.


Just like you won't tolerate your OS crashing, just like you don't want a Windows phone because it has no apps, the line between success and failure is clear, and only a few products pass through. The new BlackBerries are better than the old, but we don't need 'em if we've got iPhones and Androids. Every day I get e-mail from BlackBerry defenders… Don't you get it, you lost!


It's even worse in music. At least mobile phones cost hundreds of dollars. Music can be distributed for free so we've got delusional people foisting it upon us causing us all to tune out.


There is no center anymore, and we've got to create one.


The reason labels cater to Top Forty is at least there's a market there, in hip-hop too, country also. Other than that, it's a great wilderness with classic acts and concertgoers but the inability to break a record.


Sure, the music may not be good enough, but the landscape is incomprehensible to the fans.


We don't need tons of playlists on Songza, we just need five, maybe ten, tracks that EVERYBODY IN AMERICA listens to!


That's why Top Forty is successful.


But radio isn't about music, but advertising.


So we've got to wrest dissemination and consolidation of new music FROM radio.

There needs to be one site where everybody goes that features few tracks and readily rotates them. Nothing will boost music more.


But the techies don't want anything that doesn't scale financially.


And the wannabes don't want to be left out.


So instead we're living in a vast, incomprehensible wasteland.


THE KIND OF MUSIC


It does not matter. It's just got to titillate the eardrums.


Once a few outsiders break through with edgy material, more will be inspired to do so.


As for rewards… If playing music for a living and having people listen to it is not enough, stop now. If you're focusing on money, you're focusing on the wrong thing. You need the ability to eat and have shelter, that's about it. But the truth is scale on the Internet is so much larger than everything that existed previously that those who break through will become very wealthy and powerful. But we've got to make sure we don't purvey crap, we don't sell good to the masses. They only want incredible, that's why they're all watching TV.


You want someone to sort the money, to make the deals.


But we need an entrepreneurial spirit in business too.


Wipe out music business schools, they're a rip-off teaching what does not need to be known. You're learning how to work at a record company that neither wants nor needs you, unless you're willing to work for free as an intern.


We've got to attract the renegades, the limit-testers, those willing to turn the tables upside down who are now going into tech.


Did you know Travis Kalanick, the majordomo of Uber, which you love, started with a P2P music site, Scour?


Don't pooh-pooh P2P, everything good in music has happened as a result.


Daniel Ek stayed in, but you want him out, not realizing that the ability to have everything at one's fingertips includes YOUR music, and that there's a ton of money in streaming, just read this:


Until we can attract the best and the brightest to music, we're doomed.