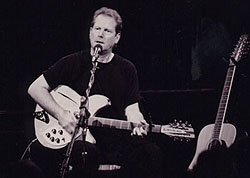 (CelebrityAccess MediaWire) — The Orchard, the world's leading supplier of independent music, has signed an exclusive digital distribution and promotion partnership with Roger McGuinn to distribute his latest effort, "Limited Edition," which was released April 1st.
"Limited Edition" will be available for download exclusively at eMusic for 90 days before being digitally distributed to all the legitimate digital music services in the United States , Europe and Australia via The Orchard's distribution network. The record will be made available for sale as a physical CD on McGuinn's website, www.mcguinn.com, as well as via online
retailer Amazon.com, www.amazon.com.

"I am a big fan of Roger's music and greatly respect how he has been at the creative forefront musically and technologically for decades. The record is incredible, and we look forward to great things with Roger," said Greg Scholl, CEO of The Orchard and managing director of Dimensional Associates, Inc, the private equity fund that owns The Orchard, eMusic and eMusicLive. "This arrangement exemplifies our vision at Dimensional of how independent companies, and artists outside of the major label system, will transform the music business, and the unique value that our businesses offer to artists and labels."

A mainstay in the music business for decades, McGuinn has also been a champion of digital music and an online distribution pioneer, having begun recording and uploading to his web site a series of traditional folk songs as early as 1995. "I have been excited by the potential of the web and of creating, promoting, and distributing music digitally for years," McGuinn explained. "Finally with eMusic, eMusicLive, and The Orchard, I have found a group of companies that are turning potential into reality; and not just for me, but for almost any musician."

In addition to working with The Orchard and eMusic on his most recent studio recording, McGuinn will partner with eMusicLive to record a live performance on his upcoming tour and release it exclusively through
eMusicLive at www.emusiclive.com.

"Roger's new record with his beautiful vocals and amazing work on the Rickenbacker and 12 string guitars will definitely appeal to his many fans. The cover of his friend George Harrison's 'If I Needed Someone' is a particular standout," says McGuinn's representative Bruce Houghton, president of Skyline Music. "This unique alliance and our plans to record an exclusive digital release for eMusicLive on Roger's upcoming tour are tremendous examples of artist promotion and distribution in the new digital age." –Bob Grossweiner and Jane Cohen