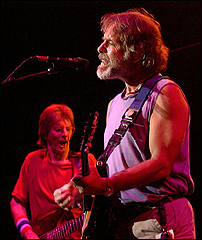 On the Dead's website, the band says: "Seven years ago, when Jerry passed, we made a conscious decision to retire the name Grateful Dead. We did so after some deep soul searching and out of our love and respect for what we had created together. After we played our first shows together at Alpine Valley last year, we were all profoundly affected by a sense of awe and connection that none of us had felt since we played with Jerry."

"It was a magical occurrence that no one could have anticipated, yet one we all want to embrace. To us, this was the Grateful Dead- without Jerry. We had stopped being the 'Other Ones' and were on our way to becoming something new but at the same time very familiar."

"Grateful Dead conjures up many different emotions and feelings for all of us; it was a BAND, it continues to be a community, an approach to life, a electrical current, a dream, the list goes on. Whenever and wherever we played this past year, we all knew that we were experiencing Grateful Dead in its multiplicity of forms. We also know that this would not have been possible without all of you joining to support us. Therefore, with the greatest possible respect to our collective history, we have decided to keep the name 'Grateful Dead' retired in honor of Jerry's memory, and call ourselves: 'The Dead.'"

The first concert officially as the Dead takes place on Valentine's Day February 14 at the Warfield Theater.
All proceeds will benefit the Unbroken Chain Foundation, the Rex Foundation and the Furthur Foundation.

A summer tour is also anticipated.