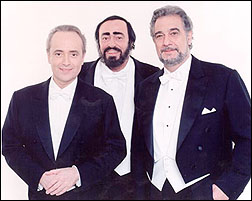 The Three Tenors — Luciano Pavarotti, Placido Domingo and Jose Carreras — performed in China for the first time Saturday, June 23, in what was China's largest and most expensive concert.

While an estimated 30,000 were in attendance, the event was broadcast live on TV to a potential viewing audience of 3.3 billion in more than 110 countries and regions worldwide.

The $10 million event in Beijing came on International Olympic Day, and is part of Beijing's bid to host the 2008 Olympic Games, working on the premise that if they can pull this off, then China is capable of hosting grand events. Pavarotti, Domingo and Carreras voiced their support for China's Olympic bid.

Production for the event included about 2,000 tons of scaffolding and 35,316 cubic feet of wood used to build an elevated seating area for 30,000 people, six giant screens and 215,280 square feet of special carpet was laid to protect the 700-year-old Forbidden City, once only used by China's royal family.