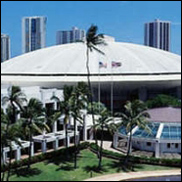 HONOLULU (CelebrityAccess MediaWire) — Ticketmaster announced a multi-year extension of its nearly ten year partnership with Honolulu's Neal S. Blaisdell complex. The exclusive alliance will include Ticketmaster services for all of the Blaisdell Center's associated venues, including Blaisdell Arena, Blaisdell Concert Hall and the Waikiki Shell. Highlights of the two companies' continued relationship include the instillation of multi-purpose Ticketmaster kiosks at each building, as well as the enabling of TicketExchange technology for all of the venues' events.

The partnership establishes Ticketmaster's dedication to tourism–particularly in regards to arts and entertainment–in the Hawaiian Islands. Ticketmaster will benefit the City of Honolulu and its surrounding counties by extending its event promotion expertise to the support of tourism initiatives for the area.

"We are pleased to extend our long-standing partnership with the City and County of Honolulu's premier venues in order to promote live entertainment in Honolulu, as well as tourism on the Islands in general," said Shirley Alexander, general manager Ticketmaster Hawaii. "While expanding this alliance, we intend to broaden Ticketmaster's reach even further by building upon our partnerships with the Hawaii Visitors Bureau and others so that, in the long run, we will all benefit from this relationship."

Ticketmaster's intuitive, touch-screen kiosks serve a dual purpose for customers at Blaisdell Center venues, as the new technology enables users to make safe and secure purchases 24 hours-a-day, and also pick up tickets already purchased without standing in a Will Call line. –by CelebrityAccess Staff Writers