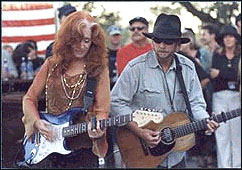 Austin City Limits kicked off its 28th season with the rockin’ rowdy blues of legendary Grammy winner Bonnie Raitt. Raitt who performed songs from her most recent album, Silver Lining, plus some of her signature tunes. Highlights included “Gnawin’ On It” featuring Roy Rogers, “Hear Me Lord” with Oliver Mtukudzi and “Angel of Montgomery” with John Prine.

Roy Rogers is recognized around the world of as one of the leading practitioners of modern slide guitar. "Pundits who bemoan the scarcity of guitar gods haven't laid ears on Roy Rogers, whose slide riffs could peel a crawfish," said USA Today. Earlier this year, Roy released an all-instrumental CD entitled Slideways on Evidence Music, which includes some great performances by Norton on five tracks. He is also featured on Bonnie Raitt's new hit release Silver Lining in a song he co-wrote with Ms. Raitt entitled "Gnawin’ on It" and has been performing the song on stage with Bonnie during her West coast dates.

Roy is also well known for his work as the producer of four of the late John Lee Hooker's releases, considered breakthroughs for the legend – The Healer, Mr. Lucky, Boom Boom and Chill Out, and two recordings for Ramblin' Jack Elliott, Friends of Mine and The Long Ride. In all, Rogers has garnered eight Grammy nominations as a producer and performer and has received national acclaim from the Washington Post, The New York Times, Blues Revue, Billboard, Rolling Stone, Offbeat and Associated Press.

In 1991, Roy Rogers and Norton Buffalo released their debut duet album, R & B, on Blind Pig Records. The following year the pair released Travellin'’ Tracks (also on Blind Pig), which included live tracks of the acoustic duet, as well as some studio tracks on which they were joined by a rhythm section.

"Roots of Nature," their first duet recording in over 10 years, is a sterling collection of thirteen finely-crafted original songs – stories, striking ballads and strong grooves that only these two can deliver. The music focuses on American Roots, folk and blues, yet covers a diverse range of styles from hot and feisty up tempo boogies, to down and dirty blues with swampy grooves, with touching ballads performed to round out the range of textures these two fine seasoned artists can perform.

Stapp's eagerness to please has gotten him sick.

The Creed singer says the band is postponing a few shows because he has acute laryngitis. Stapp says when he was in a car accident in the spring, Creed had to cancel a number of dates. As a result, they were working extra hard to make up those dates — which took its toll on Stapp's throat.

Creed did a show at Alcatraz last night for a VH-1 special, but their set was shortened and The Wallflowers were brought in to fill out the night. He says he felt obligated to perform because 600 contest winners had taken time off and flown to San Francisco for the concert.

Stapp hopes to be well again for their Los Angeles show on Oct. 20.

Lawrence, Mark Chesnutt and Joe Diffie have one more reason to be proud of their "Rockin' Roadhouse Tour."

It won an "All Access" award in the category of Festival, Fair or Special Event of the Year on Tuesday night from The International Entertainment Buyers Association.

The three artists are pleased and grateful. Diffie is happy the IEBA has recognized how they bring their brand of fun to country music fans all over the country. Lawrence said winning awards is "icing on the cake" for doing what they love.

Among them they have topped the country singles and tracks charts 42 times and have sold more than 22 million records.

The trio has just started a two-week break and will next perform on Oct. 20 at the Desert Diamond Casino in Sahuarita, Ariz.

The "Rockin' Roadhouse Tour" will be on the road through the end of the year. Over 350,000 fans have seen the show since it kicked off in mid-June.

Slewfoot Records To Launch Its Second Cavalcade Of Stars Tour

Records, the indie label that could, is launching the second edition of its "Slewfoot Cavalcade of Stars Tour," starring rocker Kristie Stremel, heartland roots kings The Morells and former Domino Kings bassist/singer Brian Caps, which will hit six Midwest markets in early November. The Morells will back both Stremel and Capps.

All three acts will have new album releases coming from Slewfoot in the first quarter of 2003, which will be distributed by Southwest Wholesale as part of the new agreement between the two companies.

The first Slewfoot Cavalcade of Stars tour featured Kristie Stremel, The Morells, The Domino Kings, Duane Jarvis and Honky Tonk Chateau in 2001. Those concerts were also midwestern and included Springfield, MO, Columbia, MO, Kansas City, St. Louis and Minneapolis. Chicago was supposed to be on the tour but got cancelled because of 9/11.