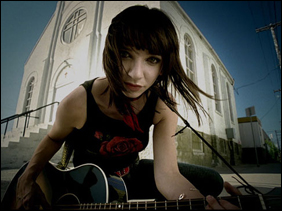 Alana is recording with famed UK producer Ken Nelson in Kelwood at a local church. This will be immediately followed by sessions at the world-class Parr Street Studios in Liverpool, England.

After several years working on demos and independent artists such as the Hellfire Sermons and Ruthless Rap Assassins, Nelson achieved success with Gomez, and world-wide success with the first Coldplay recording. He did a further two albums with the band.

He has won three US Grammy awards, two Mercury Music Prizes, and was "Music Week" magazine's 'Producer Of The Year' in 2003.

Alana’s reputation as a significant international singer/songwriter was initially bolstered by her debut album "Unsettled Down" released by Rounder Records in Canada in 2005 and in Europe in 2006.

Alana first performed in the UK and Europe in early 2006 with Dar Williams, Lynn Miles and Caroline Herring as well with Jess Klein. She returned to the UK in 2006 opening for the Elana James Trio, and fellow Canadians Blue Rodeo. She did a tour of Ireland and England in 2007 with fellow Canadian Lynn Miles

In Canada, Alana toured nationally with the Corb Lund Band as well as did dates with Stephen Fearing, Randy Bachman, the Arrogant Worms, and Tanya Tucker.

Reviews of "Unsettled Down" were plentiful. She was profiled in numerous European publicatons, including Maverick and in such Canadian magazines Canadian as Maclean's and Penguin Eggs as well as the street papers, the Georgia Strait in Vancouver, and Now magazine in Toronto.

Journalist/broadcaster/researcher Larry LeBlanc has been a leading figure

in Canadian music for four decades.

He has been a regular music commentator on CTV’s “Canada A.M” for 35 years,

and has been featured on numerous CBC-TV, CTV, YTV, Bravo! MuchMusic, MusiMax,

and Newsworld programs in Canada; VH-1, and EEntertainment in the U.S.; and

Larry was a co-founder of the late Canadian music trade, The Record; and, most

recently, the Canadian bureau chief of Billboard for 16 years.