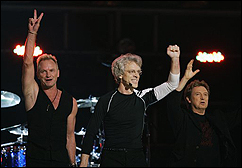 LOS ANGELES (CelebrityAccess MediaWire) — Following a rehearsal performance at The Whisky on Los Angeles' Sunset Strip, The Police today confirmed their highly-anticipated concert tour will begin on May 28th in Vancouver, playing arenas, some stadiums & making some special appearances throughout North America.

Tickets for the tour will go on sale on Feb. 17 for the initial shows and Feb. 20 for the Boston and NYC dates. Ticket prices will range from $50-$225 and be limited to 4 – 6 tickets per person depending on the venue. A portion of the proceeds from this tour will be donated to WaterAid, an international NGO founded in 1981 and dedicated to reducing poverty by improving access to safe water, sanitation, and hygiene education.

Arthur Fogel, Live Nation Chairman of Global Music, also announced that the tour will continue this fall with dates in the UK and Europe, including appearances in Holland, Germany, Italy and France with additional countries to be announced. Additional dates in Mexico, South America, Japan, Australia and New Zealand are anticipated. "The anticipation and excitement to see The Police is overwhelming and I am absolutely thrilled to be a part of bringing the band to their fans worldwide," said Mr. Fogel.

A promotion with electronics retailer Best Buy will afford fans who are participants in Best Buy's Reward Zone program the opportunity to purchase tickets beforehand, provided they have a rewards program account that was activated before Feb. 1, 2007.

The band was founded in 1977 by Stewart Copeland (drums, percussion, backing vocals) along with Sting (bass & vocals) and Andy Summers (guitar, backing vocals ) and successfully blended jazz, punk, reggae and rock. With 5 #1 albums (all five went platinum) and a string of top-ten singles under their belt, the band eventually split apart in 1984, following the Synchronicity tour. Apart from a brief reunion in 1986 for an Amnesty International benefit, an impromptu performance at Sting's Wedding and their Rock & Roll Hall of Fame induction in 2003, this will be their first tour in over 20 years.

WEST HOLLYWOOD, Calif. (AP) _ The Police announced their first tour in decades Monday at a rehearsal at the Whisky a Go-Go as a throng of fans crowded near the legendary Sunset Strip nightclub.

The group, which led off Sunday night's Grammy Awards with a live performance, broke up in 1984. Members Sting, Andy Summers and Stewart Copeland have since pursued individual careers.

The packed club got a taste of Police hits, including "Roxanne" and "Message in a Bottle," and listened to the members talk about the decision to reunite and joke about the conflicts that led to their split.

"If you'd asked me the day before I made this decision, I would have said, `You're out of your mind. My head is somewhere else,'" Sting said. "I woke up one morning about three months ago and this light bulb went off in my head: I'm going to call Andy and Stewart and tell them we should tour."

"We refer to Sting as our dear leader," Copeland said.

"On a good day," Summers added.

They insisted the disputes that broke them up were artistic, not personal.

"The nature of the arguments were all about music …. also hairstyles," Sting joked.

"We never hated each other," Copeland said. "We fought tooth and nails over the music, but as human beings, we always liked each other."

Regrouping with his old bandmates has been very healing, Sting said.

"There is a part of my life that I've sort of run away from for 25 years, but it's a very important part of my life, so to come back and be in the band and develop these relationships again _ we're more wise than we used to be," Sting said.

While all are regarded as consummate musicians, the decades away from their old material was evident Monday as the band struggled at times, with humor, to get through some of the tunes.

The throng of journalists and a few lucky fans who gained entry to the venue didn't seem to mind the occasional flubs and most sang along or cheered wildly.

"That was fantastic," said Brian Alexander, 30, adding he was too young to go see the band's shows in the `80s.

The Police plan a world tour of arenas, stadiums and some festivals beginning in North America on May 28 in Vancouver, British Columbia, moving to Europe in September and October, then re-crossing the Atlantic.

The first U.S. stop on the tour is Seattle. Among the other confirmed cities are New York, Boston, Denver, Las Vegas, Phoenix, Dallas, New Orleans, St. Louis, Toronto and Montreal. The group will headline the Bonnaroo Music & Arts Festival in Tennessee in June.

The band also expects to add other shows, including stops in South America, Mexico and Australia.

"It's going to be three guys on stage, that's all," Sting said. "The show is going to look simple but spectacular."

The group plans to stick to Police material and not include Sting's solo hits.

They sidestepped questions about whether the reunion might extend to recording new music.

Tickets for the North American leg will range from $50 to $225. A portion of proceeds will go to WaterAid, an anti-poverty organization that seeks to provide poor people access to safe water.

The Police tour will be a boost for the U.S. concert industry, which has benefited in recent years from mammoth outings by the Rolling Stones and U2.

So far, among the biggest names scheduled to tour this year are rockers Genesis, who haven't toured the U.S. in nearly 15 years. A reunited Van Halen announced earlier this month that it is planning a tour, but didn't name any specific dates. The Eagles are also planning to hit the road this year once they record a new album.