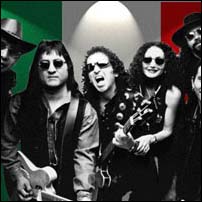 About 400 angry fans went on a rampage last weekend when they were told the Mexican rock band wouldn't play in Watsonville because the musicians were caught in a Sierra snowstorm, according to the concert promoter.

Watsonville police Lt. Ed Gluhan said officers made the 70-mile trip south to King City, where the band played Thursday night, to conduct a follow-up investigation into the mayhem that left the Veterans Memorial Building in shambles.

Arturo Arguello, 34, and Agustin Augusto, 29, where picked out of Thursday night's crowd through the help of the King City Police Department and witnesses to Sunday's vandalism, Gluhan said.

The pair were arrested without incident about 10 p.m. during the King City show, he said.

Inside the Vets Hall on Sunday, rioters toppled a tower of speakers, sending them crashing from the stage onto the floor, and poured liquid on a mixing board.

The mob also tried to overturn a large truck, smashing its windows and slashing the tires, and attempted to torch the promoter's sport utility vehicle.

Police said things got ugly when concert promoter Tony Valencia of Promociones Mexico Lindo broke the news to the crowd of nearly 700 that the headlining band would be a no-show.

“This was a ridiculous reaction to an announcement by the promoter, and these people deserve to be held responsible,'' Gluhan said.

Nearly 40 officers in riot gear were called to clear the crowd, but no arrests were made at the time.

Gluhan said Arguello and Augusto admitted to attending Sunday's concert and at least one admitted damaging the sound equipment. Both men were booked into Santa Cruz County Jail on suspicion of felony vandalism and incitement to riot.

Gluhan said officers are continuing to review photos and video from Sunday in an effort to identify others who participated in the vandalism.