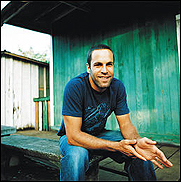 SALT LAKE CITY, UT (CelebrityAccess MediaWire) — The USANA Amphitheatre in Salt Lake City is going green – based on the advice of environmental surf rocker and all around chill dude, Jack Johnson.

Johnson got the ball rolling at USANA when he played the shed in 2005, and requested to review the environmental policy set in place by United Concerts. The singer-songwriter suggested that the company take a few more basic steps to be environmentally conscious, such as recycling at the venue, before he would commit to the performance.

Administrators at UC took the hint and ran with it, realizing that they should already have been following his idea’s full time.

United Concerts contacted several colleges in the area to see if anyone was up for the task of greening USANA, and struck a deal with Utah Valley State College’s Earth Science Department.

Danny Horns, the department head, had been teaching a class that established a process for companies to become more environmentally friendly by looking at their “footprint analysis,” or what is essentially an environment audit.

“All of the operations of a business have to be looked at…energy use, lights, waste generation. We look at how much trash they throw away, car pools, water use, etc.,” he told the Deseret Morning News. “The goal of looking at those is to determine which one would be easy to improve on.”

The group found that USANA could significantly reduce the amount of waste produced at concerts, and gave United Concerts a set of guidelines to follow.

United Concerts’ Chris Abbott told the paper that he was sent a four-step plan that began with recycling. Fans are provided with recycling bins in all areas, and concessionaires will used recyclable and biodegradable materials this year.

“If we can bring in recyclable products, the output is easier to recycle,” said Abbott.

The second step was the formation of USANA’s new “green team.” Some of the UVSC students will set up stations for each concert to educate concertgoers about recycling and going green.

“Rather than having a smiling trash can staring at you…that’s where the green team will come in handy,” said Abbott.

In the coming summers, United Concerts plans to implement more steps toward greening the venue, including improved CO2 emissions from tour busses and cars, and more efficient water usage with low-flow toilets and new lawn-watering systems. All thanks to Jack Johnson. –by CelebrityAccess Staff Writers