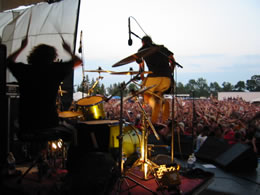 VANS Warped Tour '02 wrapped up a 47-city trek in Detroit on August 18, marking the most extensive yet
for the longest running U.S. touring festival which began in
1995. "Eight years later, this tour remains
extremely relevant," noted tour founder Kevin Lyman in a recent
interview with the Flint Journal. "It's become a rite of
passage for punk and skate kids. Some of these kids were five when this
tour started. They had older brothers or sisters who went, and their
parents are OK with it It's the first concert their parents let them
go to." This year's tour drew nearly 500,000 fans and once again
emphasized the longevity of the tour.

This year's tour expanded into new markets such as Billings, Fargo and
Omaha, proving how the tour continues to grow. "A lot of people doubted
the line-up we put together, and it proves that it's still about the
Warped Tour for the kids," Lyman comments. "We went with a broad range
of acts at all different levels. The whole concept is a good value. The
kids can see a lot great bands for a good value (the average ticket
price was $21.33)."

In addition to keeping ticket prices low for fans, the VANS Warped Tour
also played a significant role in helping to break new bands. "I think 14
bands that were on Warped Tour this summer were on the new music charts
last week," Lyman says. "It shows that the Warped Tour can break
artists or help them develop at a quicker pace."

A new highlight this year is the tour's memorabilia book, Warped Book: Tales of Freedom and Psychotic Ambition.
A collaboration between tour
founder Kevin Lyman, author Heidi Siegmund Cuda and photographer Lisa
Johnson, the book is now available at www.warpedbook.com. Warped Book
enables fans to tap into the lifestyle of the tour, featuring Warped
facts, road stories from bands, interviews with past and present Warped
bands including Pennywise, Rancid, NOFX, The Vandals, Flogging Molly and
Ice T, as well as behind-the-scenes photos and other memorabilia
collected over the past seven years.