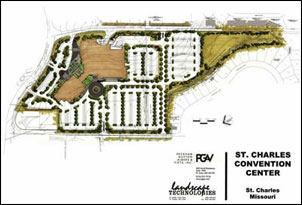 "I am very pleased that these two highly experienced and skilled professionals are now part of our new St. Charles Convention Center team,” said Global Spectrum's Shura Lindgren, general manager of the 154,000-square-foot convention center scheduled to open next spring. "Susan Sarakas and Joe Lee are indicative of the outstanding staff who will help us make the St. Charles Convention Center the pride of the mid-west and a very marketable attraction for local, regional and national convention and exhibition planners and meeting planners."

Sarakas has over 24 years of hospitality experience and joins the Convention Center from the Adam's Mark Hotel in St. Louis, MO. Most recently, she was in direct sales and prior to that market research & quality control.

Lee joins Global Spectrum from Clear Channel Radio where for the past four years was regional controller. Prior to that he was controller for the St. Charles based company, Vision Comm-Payphones of America. –Bob Grossweiner and Jane Cohen

(CelebrityAccess MediaWire) — David Carlucci has been appointed president and executive director of the forthcoming Bethel Woods Center for the Arts in Sullivan County, NY, on the site of the 1969 Woodstock Festival. He is currently general manager of House of Blues Concerts Midwest, the operator of the Blossom Music Center in Cuyahoga Falls, OH, the Scene Pavilion in Cleveland and the Timberwolf Amphitheater at Kings Island in Cincinnati. Carlucci spent 17 years on the staff at the Saratoga Performing Arts Center in Saratoga, NY.

The Bethel Woods Center, a 4,800-seat pavilion with lawn seating for 12,000, is scheduled to tentatively open on July 1, 2006, with an inaugural concert by the New York Philharmonic. It will be styled after the Tanglewood Festival in Lenox, MA and Saratoga Performing Arts Center. – Bob Grossweiner and Jane Cohen

After a $750-million makeover, the California Theater will be San Jose's first major hall to open in three decades when Opera San Jose moves into the former movie palace on Saturday night.

Civic leaders hope the opening will mark a new era for opera and symphonic music in Silicon Valley, and the business community hopes it will lure visitors and spur new development around the deluxe 1,146-seat concert hall.

"It changes the playing field," said Andrew Bales, president of Symphony Silicon Valley. "It's our best shot at having a destination landmark."

The California, opened in 1927 and shut since 1973, has been restored to its vaudeville-era design with polished marble, heraldic crests, gold-leafed fleurs-de-lis and ceilings covered with quasi-Moorish and Navajo designs. The theater will also show classic films.

Admission to this year's fair will include the chance to attend concerts for free — a change from previous years in which many shows cost 18 dollars to 30 dollars. That includes the cost of getting into the fair.

Pledger said this year the six dollar adult, or four dollar child admission will be all it takes. He said the fair should be affordable for the family.

The fair runs from October eighth to October 17th.

The Marie P. DeBartolo Center for the Performing Arts, which took four years to build, has opened to visitors, and an open house is planned for next weekend.

The center was built in the pale concrete-and-brick Gothic style of many of the other buildings on the Notre Dame campus. Visitors are welcomed by large, glass-and-wood front doors entering into an expansive lobby. The bare walls are tan, ornate carpets include patterns of bright reds, blues and yellows, and the ceiling beams are painted a bright blue and gold.

"This building is just magnificent," said Fred Franco, one of dozens people who have visited the center since it opened in late August.

The building houses high-tech theatrical facilities designed to accommodate as many different types of performances as possible. It has five main theaters and dozens of classrooms, faculty offices and student labs.

The largest of the theaters is the 900-seat concert hall, intended for classical concerts and recitals. There's a 350-seat theater for most student and professional play performances and a 100-seat venue for experimental theater. An organ and choral hall contains a $1 million organ built in the style of 18th century north German organs.

And for those who just want to see a movie, a 200-seat cinema in the center is the only movie theater in Indiana that boasts a THX-certified sound system.

MINNEAPOLIS, MI (AP) — Some out-of-town buyers are interested in three theaters along Hennepin Avenue in Minneapolis.

Investors from New York, Los Angeles and Chicago joined local players at a mandatory session for those interested in owning or operating the city's Broadway-style Orpheum, State and Pantages theaters.

The coveted venues have been run since 1995 by the Hennepin Theatre Trust and its predecessor, Theatre Live. The City Council voted unanimously a year ago to an open bidding process for the operation or purchase of the theaters.

The informational session yesterday was mandatory for anyone looking to submit a proposal.

OKLAHOMA CITY (AP) — Construction on a $3.5 million restaurant and music hall being built by country singer Toby Keith could begin next month.

Designs for Toby Keith's Roadhouse restaurant were presented to the Oklahoma City Urban Renewal Authority, which is overseeing the revitalization of the far south end of Bricktown, the city's entertainment district.

Keith's restaurant and live music venue will be part of a commercial complex being built on the canal that goes through the heart of Bricktown.

Dave Zimmer, project manager for the venue, said the one-story building will be built with a two-story facade and will seat up to 600.

The restaurant and music hall is being built by Keith, a Moore native, and the Hal Smith Group, which owns and operates 68 restaurants, including Charleston's, Boomerang Grill and the Red Rock Canyon Grill.

The restaurant and music hall is scheduled to open by April.

Zimmer said the entertainment will be overseen by Keith's booking agents, who will try to schedule music acts at least five days a week.

"You're going to have acts stopping by that are just passing through now," Zimmer said. "It's going to be a lot of fun."

"Lower Bricktown" developer Randy Hogan predicted the restaurant and music hall will be a tourist destination, hopefully, he said, "similar to a miniature Austin City Limits."

Hogan said the neighboring 16-screen Harkins Theater is still scheduled to open Oct. 1. An elaborate fountain and plaza, meanwhile, will be dedicated Friday.

Other tenants scheduled to open over the next couple of months include an Earl's Rib Palace, a Nothing But Noodles, a sit-down Sonic restaurant and a Marble Slab Creamery.

Construction is to begin in April on a $35 million, 235-room Embassy Suites, which is being built between the Bass Pro Shops and the Sonic Restaurants corporate headquarters on the southeast end of the entertainment district.

Hogan also confirmed Wednesday discussions are under way on whether to build a midrise hotel or residential tower along the Bricktown Canal.

"We're looking at two types of hotel products, and one potential combination of residential and hotel," Hogan said.

"We want to make sure what's left is a perfect fit into this mix."

Information from: The Oklahoman, http://www.oklahoman.com