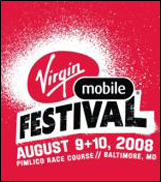 LAS VEGAS (CelebrityAccess MediaWire) — Virgin Group Founder and Chairman Sir Richard Branson announced today the headline acts for the third Virgin Mobile Festival, the largest music and arts festival on the East Coast, being held August 9-10 at Pimlico Race Course in Baltimore, Maryland. The festival headliners are Foo Fighters, Jack Johnson, Kanye West, Nine Inch Nails and Stone Temple Pilots. The Virgin Mobile Festival is being produced for the third year by I.M.P., one of the country's leading independent concert promoters. Fans can check out the official festival website at www.virginmobilefestival.com to sign up for news and updates.

"I couldn't be more excited about the third U.S. festival this summer. In addition to bringing out stellar artists, last year's event was one of the largest â€˜green' music festivals in the States," said Branson, whose legendary Virgin Festival heritage is the inspiration behind the Virgin Mobile Festival. "Our efforts continue to reflect Virgin Group's passionate commitment to fight climate change and minimize carbon emissions. Virgin Mobile USA will again host a wonderfully eco-friendly event that's light on carbon impact but heavy on the rock and roll."

"Hosting this festival has always been an incredible experience for us, our employees, our customers, our partners and of course, all of those who attended," said Dan Schulman, CEO of Virgin Mobile USA. "As the list of bands, DJs and performance artists continues to grow, it's clear that this year's experience will be just as amazing. With two full days of music presented along with the extraordinarily fun and very â€˜Virgin' vibe, Virgin Mobile Festival will be the outdoor concert event of the summer."

Kyocera Wireless will again be the handset partner and premiere sponsor of Virgin Mobile Festival. In Vegas, Branson also debuted Virgin Mobile USA's "Virgin Mobile Festival Special Edition Wild Card" handset from Kyocera, which will be available exclusively at Best Buy as the summer kicks off. Fans who purchase the phone will receive festival-inspired content as well as other additional benefits.

"When the rest of the artists are announced, everyone will see that we have remained true to form in our quest to provide nothing but the very best bands in the world from the start of the day through the final notes," said Seth Hurwitz, Chairman of I.M.P. "People have come to rely on us for this, and this year's Virgin Mobile Festival will feature the most solid and exciting lineup ever." –by CelebrityAccess Staff Writers