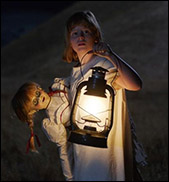 A sequel to 2014's "Annabelle" the film series is in itself, a spin-off of the ghostly "Conjuring" series, the modestly budgeted film garnered decent reviews and promised future films from the franchise.

In North America, Christopher Nolan's "Dunkirk" held on to second place, adding $11.4M from theaters in the U.S. and Canada over the weekend, while the Open Road animated release "Nut Job 2: Nutty by Nature," squeezed in at third place, opening to an estimated box office take of 8.9m domestically.

The top 12 worldwide weekend box office estimates, listed in descending order, per data collected as of Sunday, August 13, by comScore are below.

The top 12 domestic weekend box office estimates, listed in descending order, per data collected as of Sunday, August 13, are below.