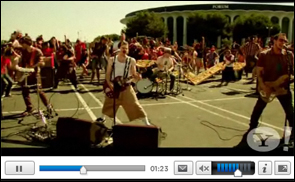 LOS ANGELES (CelebrityAccess MediaWire) — Weezer helped to break some World Records during the video shoot for their latest charting song, "Troublemaker," the second chart success from their latest album "Weezer" AKA the red album.

Stuart Claxton was on hand from the Guinness World Records organization during the day-long shoot in Los Angeles on August 21st where the band helped to break a number of records.

Largest Game of Dodgeball
The largest game of dodgeball, which consisted of two teams of 50 people (100 total) who played against each other.

Most People in a Custard Pie Fight
The most people (120 in all) to ever become involved in a in a custard pie-related imbroglio.

While some of these distinctions would appear to be of dubious merit, they were duly authorized by the unimpeachable folks at the Guinness Book of World Records. All of these miraculous feats were accomplished as a part of the video which debuted on Yahoo!Music on October 6th. – CelebrityAccess Staff Writers