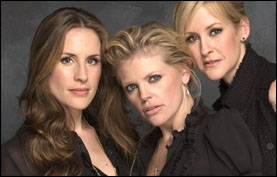 "Dixie Chicks: Shut Up and Sing" travels with the Dixie Chicks, from the peak of their popularity as the national-anthem-singing darlings of country music and top-selling female recording artists of all time, through the now infamous anti-Bush comment made by the group's lead singer Natalie Maines in 2003. The film follows the lives and careers of the Dixie Chicks over a period of three years during which they were under political attack and received death threats, while continuing to live their lives, have children, and of course make music. The film ultimately presents who the Dixie Chicks are as women, public figures and musicians.

"I am extremely proud to be associated with this film because it's not only an outstanding and creative piece of work but it also exposes our responsibility as Americans to confront our fundamental right to freedom of speech," said Harvey Weinstein, co-chairman of TWC.

"At a time when Americans are divided between red and blue, rich and poor, immigrant and citizen, the Dixie Chicks and their music cross over many lines," said Kopple. They are contemporary but rooted in tradition, strong yet vulnerable — career women who are deeply connected to family. This film tells the story of these all-American women who refused to back down and in the process became even stronger."

"The Dixie Chicks paid a huge price for questioning the invasion of Iraq and daring to say what millions of people were thinking," said Peck. "Our film looks at the cost of standing up for what you believe in, and the unbreakable bond between three brave women."

Michelle Krumm, executive vice president and co-head of acquisitions and co-productions, brought the project to The Weinstein Company. Krumm, Michael Cole, co-president of production, and Barry Littman, executive vice president of business and legal affairs, negotiated the agreement on behalf of The Weinstein Company. CAA and Simon Renshaw negotiated on behalf of the Dixie Chicks. –Bob Grossweiner and Jane Cohen