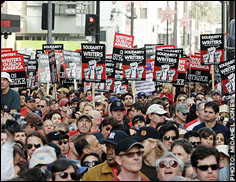 According to Variety, as many as five agents in the motion picture group were laid off when the agency invoked the force majeure clause and there may be more to come. Among the affected agents were Renee Tab, Eva Lontscharitsch and Brian Levy. While the agents still remain under contract, ICM isn't obligated to pay them.

Other cuts at the agency include a series of pay cuts in the six figure salaries commanded by some of its agents, with some of the slices being as much as 30%.

Other agencies have introduced pay cuts and limited travel expenses as well, but as of yet, none of the other majors has had to sideline staff.

"We made some cuts in manpower over the last year in anticipation of this, and we have trimmed expenses as much as possible," David Gersh of the Gersh Agency told Variety "We were able to make ourselves leaner, but the longer this continues, the harder it is going to become. You might roll back on the bonuses, and perhaps roll back pay between 10% and 20%. The strike has been painful to every agency, but you do your best not to have it kill individuals."

Boutique agencies haven't fared as well and layoffs have been the order of the day. Innovative sidelined seven lit agents and other firms such as Abrams have cut back on salaries.

The impact of the strike has also been felt in other areas as many of the typically lavish Grammy parties that high profile agents like Ed Limato have staged in the past have yet to materialize this year.

"I realize this is more serious than a common cold, but it's not terminal cancer, either," Paradigms' Sam Gores told Variety "Even if you see a 30%-35% drop in revenue this year, if you've got a growing company, you can handle it. If you amortize that loss over 10 years, that's 3% a year. You have to look at it that way even though, of course, you must be cautious over the short term." – CelebrityAccess Staff Writer