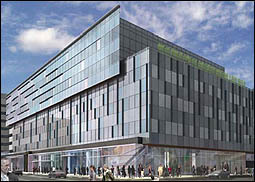 LOS ANGELES (CelebrityAccess MediaWire) — William Morris Endeavor Entertainment has quietly agreed to pay $30 million to real estate developer George Comfort & Sons to settle a dispute that arose after the agency refused to take up residence in a new office building, despite having inherited 20-year lease on the property.

"The matter has been resolved on a mutually satisfactory basis," spokesmen for WME and New York-based George Comfort & Sons both said in prepared statements.

According to the Wall Street Journal, WME inherited the lease on the new building following the 2009 merger of Endeavor and the William Morris Agency. The William Morris Agency had signed the lease to occupy the newly-constructed office building, but following their merger with Endeavor, the new hierarchy at the agency had little enthusiasm for the company's new digs, which were both expensive and adjacent to rival talent agency Gersh.

A particular point of contention appears to have been a 750-space underground parking garage shared by both buildings. WME maintained that the shared garage violated an exclusivity clause in their contract which stipulated that competitors be barred from sharing the space, including the parking structure.

However, an independent arbitrator did not agree with the company's views on the garage, ruling last summer that the shared valet garage did not render the lease invalid. The decision left WME with significant exposure on the building, with some estimates suggesting that the company might be on the hook for as much as $70 million.

According to the WSJ, WME, which was estimated to have grossed more than $400 million last year, is not required to pay the full amount of the settlement at once. – CelebrityAccess Staff Writers