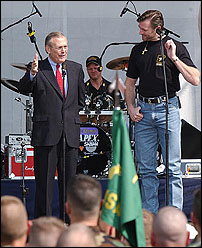 Worley, introduced by Defense Secretary Donald H. Rumsfeld, sang at a concert in the Pentagon courtyard on Wednesday that will be broadcast to U.S. service members around the world.

"Have You Forgotten?" which is atop the Billboard charts, focuses on the Sept. 11 terrorist attacks as a reason to support U.S. military action in Afghanistan and Iraq.

Worley defended the song as "pro-American" and "pro-military." As for critics who call the song "pro-war," Worley said if that means he supports President Bush and the recent military action, then the title fits.

The singer said his visit with U.S. soldiers in Afghanistan inspired "Have You Forgotten?"

"I wrote this song because I wanted to do something just to pay back the soldiers for what they've done for me and for us as a country," Worley said in introducing the song.

Americans need to remember the troops that are missing in action, Worley said.

"Let's celebrate the ones we found and let's pray constantly for those that we haven't," the singer told the crowd. "I guarantee you there's good American soldiers on the ground right now looking for those other ones."