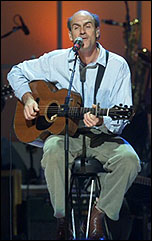 CHAPEL HILL, North Carolina (AP) – A bridge over Morgan Creek immortalized in one of James Taylor's songs soon will bear a plaque naming it for the singer.

On April 24, the bridge built in 1987 on U.S. 15-501 South, a mile from Taylor's boyhood home, will named the "James Taylor Bridge." Taylor will attend a public ceremony at the Dean Smith Center hosted by the N.C. Department of Transportation and the Chapel Hill Museum.

Four days later, the museum will unveil a major permanent exhibit on Taylor's life. His early years were spent in Chapel Hill, where his family moved in the early 1950s and where his late father, Isaac, was dean of the medical school at the University of North Carolina at Chapel Hill.

Though the state awarded Taylor its highest civilian award in 1998, this is the first time it has named a structure for him.

"I think a lot of children in North Carolina have been named for him, but no buildings or roads," Taylor's mother, Trudy, said this week.

"We all think this is a wonderful idea and we are very, very happy that the state of North Carolina feels that James is important to the state and to Chapel Hill and to Morgan Creek."

Morgan Creek, down a steep slope from the former 11-room Taylor home on Morgan Creek Road, was mostly wooded and overgrown when Taylor was a boy. It crawled with snakes and lizards and poison ivy, with few houses in sight atop the slopes above.

The five Taylor siblings and neighborhood friends spent time on the creek, fishing for catfish, building treehouses, and stringing up jungle hammocks.

Part of the refrain goes: "Half a mile down to Morgan Creek, Leaning heavy on the end of the week, Hercules (the family dog) and a hog-nosed snake, Down on Copperline, We were down on Copperline."