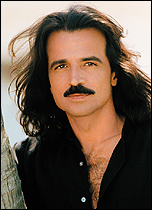 Yanni will kick off the first leg of his world tour, his first in five years, March 1 in
Las Vegas. Touring in support of his forthcoming album, "Ethnicity", due February
11, the 58-city arena road trip winds down June 1 in St. Louis.

"Many of the world's cultures are represented on this album," Yanni says.. "It has a
lot of ethnic color — in other words, it has ethnicity. Ethnicity
has to do with race and culture, and — in the way I use it for this album — the
color and beauty of a multicultural society."

Coinciding with the album's release is his memoir, "Yanni in Words," (Miramax
Books), written in collaboration with David Rensin.