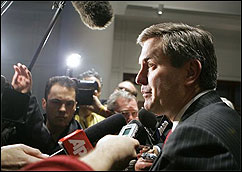 LOS ANGELES (CelebrityAccess MediaWire) — A squabble has taken to the business pages of the Los Angeles press, between Peter Zen, president of FIT Investment Corp., who owns the downtown Westin Bonaventure hotel, and AEG President Tim Leiweke, who’s company is currently in planning stages for a new convention center hotel in downtown Los Angeles, nearby the AEG-owned Staples Center.

Zen, a well-known rival to downtown developers, including Anschutz Entertainment Group, has filed a lawsuit to stop public funding of the planned facility. He has asked the court to strike down a $177 million public benefits package for the developments of the hotel, maintaining that city officials were misled into approving a much larger amount than was actually needed, according to the Los Angeles Business Journal.

Soon after Zen made his feelings known on the new hotel, both sides were quick to put their words into the papers.

“Let the billionaires pay for their hotel,” Bonaventure attorney Christopher Sutton told the paper. “They don’t need taxpayer money. If they want this bad enough they can pay for it on their own.”

The Business Journal reported that the lawsuit cited “false data” regarding the need for public subsidies.

AEG’s Leiweke was quick to respond.

“He should be ashamed to call our character into question like that,” Leiweke told the paper. When asked if AEG planned a countersuit, Leiweke replied, “I’m not getting into it, but I think our actions will speak loud enough.”

Richard Ackerman, a principal with Apollo Real Estate Advisors LP, another developer of the hotel project, told the paper that Zen and his attorney are “out of bounds” by accusing them of the false information.

“He has no idea who he is dealing with,” Ackerman told the paper. “We are going to come at him with guns blazing.”

The City Council is expected to vote on the public funding package this month, which will allow the developers to use hotel room taxes to help pay for its estimated $300 million construction cost. The city is also planning to waive building permits, business licensing fees and taxes collected on parking to help sway costs. The city has also agreed to provide a $20 million loan to the developers if the measure passes.

“He is not some environmental group trying to save the planet,” Ackerman said of Zen to the paper. “He is a competitor.”

Zen hasn’t outright disagreed, but countered with a question of his own in the paper: “So as recipients of all this public money, are they not acting in their own self-interest?”

The city has argued that a hotel is needed to attract large conventions, which they say are avoiding Los Angeles due a lack of rooms. The lack of convention business is forcing the city to spend more than $20 million per year out of its general fund to cover bonds issued to pay for the convention center’s construction. Supporters say the hotel would make the Convention Center self-sufficient.

“This is in the best interest of the Convention Center, the tourism and the hotel industry and taxpayers,” Leiweke told the paper. “We cannot let one frivolous lawsuit derail what has been in the works for 20 years, and we won’t.”

Zen stepped down as chair of the Convention Center Department Commission in 2003 to avoid a conflict of interest, has been acting out against the project since its inception.

He won a previous suit against the city, charging it was “gifting” public money to the hotel’s developers by financing construction with tax-exempt bonds, forcing the city and developers to come up with the current package. The city appealed the decision and a ruling is expected in the near future. –by CelebrityAccess Staff Writers