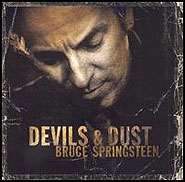 (CelebrityAccess MediaWire) — Not that he really needs the sales, but Bruce Springsteen's new album, "Devils & Dust," has a bit too much of a kick for the caffeine-pushers at Starbucks.

The album went to No. 1 over the weekend but that hasn't stopped the java joint from nixing a deal to sell the CD in its chain stores. Newsweek reported yesterday on its Web site that it's all because one song on the album glorifies – gasp! – sodomy.

The song earned the album, released last week on Columbia Records, a Sony Music label, a parental warning label. It is the first album in Springsteen's catalogue to carry such a warning.

Starbucks declined to comment on the flap, the mag said. The episode appears to be the first time Starbucks has declined to stock an album by a major act because of concern over lyrics, notwithstanding the warning sticker. The java juggernaut, with almost 6,400 outlets in the U.S., has be­come an influential link in music distribu­tion in just a few short years, especially in 2004.

Starbucks boldly demonstrated its power in music last year when its outlets accounted for at least a third of sales of the million-selling album of Ray Charles duets, “Genius Loves Company,”as well as Tina Turner and Norah Jones. Record labels increasingly view Starbucks as an attractive outlet for reach­ing fans of adult contemporary music, in­cluding baby boomers flush with disposable income but who’ve long since stopped browsing record-store aisles. What’s more, the mix of coffeehouse and music has a nostalgic appeal.