LOS ANGELES (CelebrityAccess) Chris Charucki, longtime production manager for the Grateful Dead, has died. His age and date of death were not known at press time but Amplify magazine did an amazing job of providing dedications to the RFL (Roadie For Life), who began hauling gear for the Dead in 1993.

“Charucki was a legend,” Don Strasburg, co-president and senior talent buyer AEG Presents Rocky Mountains, told Amplify. “I’m sure his spirit will always be part of the Grateful Dead family and community. I’m honored he was my friend and very sad he won’t be around to make fun of me.”

“Chris Charucki was rock and roll,” Peter Shapiro with Brooklyn Bowl, LOCKN’ Festival and Capitol Theatre, which honored Charucki on their marquee after his passing, told Amplify. “When you saw him at his desk side-stage you felt better. You knew that whatever happened, with Chris there, things would be OK. He was a force that was able to bring the energy of punk rock to a world (the Grateful Dead) whose ethos was also about sometimes going against the tide. Chris brought the worlds of punk rock and the Grateful Dead together and meshed them to create what is basically….him. He is going to be missed greatly.”

David Lefkowitz, VP for Clubs and Theaters at Live Nation Philadelphia, told the mag, “Charucki came from working in local clubs in San Francisco, like the I-beam, humping gear and eventually running stages and venue production. Local bands who had the privilege of playing there on a regular basis learned the ropes from him, and learned that his hard exterior was a front for one of the sweetest and funniest guys around.”

Charucki was the topic of an interview by Jambands.com in 2003.

RIP Chris Charucki. We will miss your mischievous but oh-so-sweet smile at The Cap, and at all of the shows we did together. So glad we got to sit and have that Tangy Taffy at Radio City. We will treasure it, and you, forever. ⚡🙏⚡ pic.twitter.com/T4hI9reueO 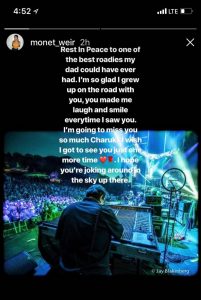