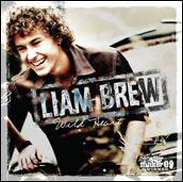 Liam’s finalist nomination is for his hit single ‘Girls With Girlfriends’ off his debut, and Toyota Star Maker winning, album ‘Wild Heart.’

Toyota’s Manager, Sponsorship and Promotions, Wayne Gabriel said: “Toyota is committed to supporting emerging country music artists and it’s fantastic to see such tangible benefits of the Toyota Star Maker award as Liam’s nomination for New Talent of the Year.”

Soon after winning the talent search in January, Liam hit the road in his prize-winning Toyota RAV4 (which he has the use of during his title year) and the Compass Bros recording studio under the direction of award-winning record producer Graham Thompson.

It was launched at the Gympie Muster.

One of Liam’s biggest influences was Star Maker 1990 winner Keith Urban. Liam and Keith grew up just a few kilometres apart near Caboolture, Queensland, and the parallels between the two are fascinating.

Liam was born the year Keith won Star Maker and the first talent quest he ever won was in a junior male category which had been won by Keith two decades earlier. Their names are engraved side by side on the trophy.

These days, Liam regularly performs the same venues Keith played as a young artist and their music has a similar quality with “an energy and freshness that is unmistakable”.

While his predecessors were among the first of their generations’ home-grown country acts, Liam is the first Gen Y male to launch himself on the country scene.

“All their music has influenced me,” Liam said. “Now I feel I’m part of a new wave of country music, one that will connect with a new generation of fans, the kids I’ve grown up with.”

Liam is the only male finalist for New Talent in the Country Music Awards of Australia to be presented in Tamworth on Saturday January 23, with Victoria Baillie, Jayne Denham, Ronni Rae Rivers and Lianna Rose.

Toyota Star Maker 2010 will be staged on Sunday January 17 at the Tamworth Regional Entertainment & Conference Centre. –by CelebrityAccess Staff Writers