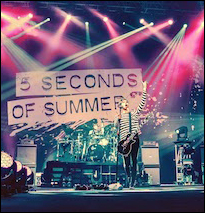 The trek was the group`s second headlining tour, which covered four continents during an eight month span in 2016.

With the bulk of the tour’s box office stats reported during the past week, $26 million in ticket sales earns the Australian quartet the top slot on the Hot Tours roundup.

Add that sum to grosses reported earlier this year and the tour wrapped with an overall box office take of $39 million from 743,906 sold seats at 102 performances.

Touring in support of its second studio album, Sounds Good Feels Good, released in Oct. 2015, the band hit the road in mid-February with an 11-show sweep through Asian markets.

A European leg kicked off on April 5 with 34 cities booked in 15 countries through mid-June. A North American jaunt was next and continued through late-September and, finally, a three-city stint in the group’s home country wrapped with two shows in Sydney on Oct. 4 and 5.

London’s O2 Arena produced the highest gross and attendance counts during the tour with $1.3 million in sales earned from 25,408 fans at sold out performances on April 7 and 8, but the highest gross for a single performance was $838,378 at Manila’s SM Mall of Asia Arena on March 12. Among the venues the hosted the tour for one show, Hersheypark Stadium in Hershey, Pennsylvania, drew the largest crowd with 13,887 present on July 2.