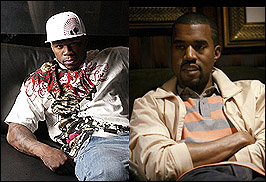 NEW YORK (AP) — Like candidates trying to sway voters on Election Day, Kanye West and 50 Cent will appear on BET's "106 & Park" on Tuesday, when both their heavily anticipated albums hit the stores.

West and 50 Cent have hyped the albums as an epic battle of rap titans — 50 Cent has said he'd retire if West's "Graduation" outsells his "Curtis" CD in their first week out.

BET is treating the Tuesday-evening event like a top heavyweight fight, even borrowing Stuart Scott from ESPN to deliver a statistical breakdown of the two rappers. Both are set to perform, but whether they will engage in a rap battle remains to be seen.

While the two have engaged in plenty of trash-talking in recent weeks, Stephen Hill, an executive vice president at BET, says this clash of hip-hop hotshots isn't about bad blood.

"I don't think it's a battle, I think it's a lot of fun. I think Kanye will tell you he moved his date to 50's date to draw this type of attention, to create this marketing opportunity," he said. "We're gonna have fun on Sept. 11, the only place they are going to be together."

Left out of the fun? Country star Kenny Chesney, whose new album is also being released on Tuesday. The country star has put both rappers on notice that he may emerge as the ultimate victor when the week's final tally is released.