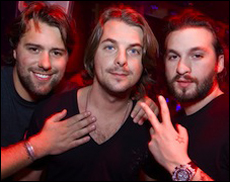 Irish police arrested Raymond Donnan, 22, in connection with the incident, claiming the man was responsible for stabbing four people, with the other incidents resulting from knife fights and broken bottles in what police called "a 'significant number' of unprovoked attacks," according to MTV. Donnan appeared in Dublin's Central Court Monday morning (July 9) and was charged with assault causing harm, possession of a knife, violent disorder and public order offences. One victim remains in the hospital with four stab wounds to the back and kidneys, said Hot Press.

In an unrelated incident, another man in his early twenties died of a suspected drug overdose, though specifics were not known by press time.

Monday morning, the group released a statement via its Facebook page saying they were unaware that anything had happened during the show, but are cooperating with the promoter of the festival and are awaiting further details.

"We played a festival in Ireland at the weekend and reports of incidents are coming to us," the statement read. "We didn't see anything but have asked for all the info and are respectful of the promoter's need to wait and give us all the clear facts. When we know more we will liase with the Festival promoter directly on what we can do to help but for now we have to respect their request to us that we remain quiet and respectful of their event safety processes. The festival itself was amazing and we had no idea this had happened and neither did the other numerous artists who played. Once we know all the facts we will deal with it in the best way we can. Thank you. Swedish House Mafia."

MCD, the promoter who put on the festival, insisted that appropriate security measures were in place. "Public safety is always our number one priority and we actively engage in detailed planning in advance to ensure this," said MCD managing director Denis Desmond. "Ticket holders entering the site were subject to a search permissible by law. Every precaution as far as possible was taken to ensure the safety and security of the audience at all times."

The festival — attended by some 45,000 people — was to be one of the last performances for Swedish House Mafia, which announced last month that this would be their final tour. Earlier today, they were confirmed as one of the myriad of star performers for this September's iHeartRadio Festival in Las Vegas.