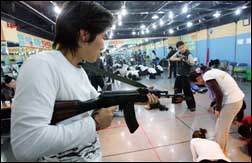 LOS ANGELES (CelebrityAccess MediaWire) — A musical about a brutal prison camp? It may seem like bad grist for an entertaining musical, but that's what Yoduk Story is about.

Directed by Jung Sung San, survivor of a North Korean gulag, Yoduk Story is based on real events that took place at the Yoduk prison camp in North Korea. The musical captures graphically the arbitrariness and cruelty of mankind, yet also speaks of universal hope, love and redemption, and tells the world that North Korean citizens–like the rest of humanity–yearn for freedom. Freedom House played an instrumental role in supporting the production of Yoduk Story in the United States.

Yoduk Story will be showing at the Music Center at Strathmore in Bethesda, MD, on October 4, 5 and 6, 2006. It will then play at the Scottish Rite Auditorium in Los Angeles on October 19-22, 2006. More information about the musical is available at www.yodukstory.com.

"Based on real events, Yoduk Story embodies the hopes of the North Korean people," said Jae Ku, director of Freedom House's North Korea program. "This show will give Americans a sense of the hell that many North Koreans live in, and yet it also tells an inspiring story about the incredible determination of the human spirit."

Yoduk Story is part of a wider effort on the part of Freedom House to educate the public about the situation in North Korea. In order to raise awareness of the egregious human rights condition in North Korea and to galvanize world opinion into action, Freedom House launched an international, year-long advocacy campaign in 2005 which included four international conferences in Washington, D.C.; Seoul, Korea; Brussels, Belgium; and Rome, Italy.

Freedom House, an independent non-governmental organization that supports the expansion of freedom in the world, has monitored political rights and civil liberties in North Korea since 1972. Freedom House's survey of political rights and civil liberties in every country of the world, Freedom in the World 2006, ranks North Korea as Not Free. – CelebrityAccess Staff Writers