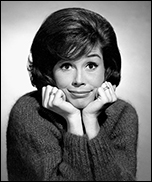 Mary Tyler Moore, a comedian, and actress, best known for her roles in sitcoms such as the Dick Van Dyke Show and The Mary Tyler Moore Show, has died. She was 80.

"Today, beloved icon, Mary Tyler Moore, passed away at the age of 80 in the company of friends and her loving husband of over 33 years, Dr. S. Robert Levine," her publicist, Mara Buxbaum, told ABC News. "A groundbreaking actress, producer, and passionate advocate for the Juvenile Diabetes Research Foundation, Mary will be remembered as a fearless visionary who turned the world on with her smile."

Tyler-Moore, a native of New York, scored several early roles in the 1950s in commercials, television, and film, but her breakout moment was when comedic legend Carl Reiner cast her as Laura Petrie in the hit sitcom The Dick Van Dyke Show. The show ran for 5 years, earning 16 Emmys and helped to make Moore a household name.

Starting in 1970, she followed up the Dick Van Dyke show with her own sitcom, The Mary Tyler Moore Show, which cast Moore as a never-married, independent career woman working as a producer in a TV newsroom. With a cast that included Ed Asner, Valerie Harper, Gavin MacLeod and Ted Knight, the show became one of the most acclaimed programs in American history, touching on subjects ranging from equal pay for women, pre-marital sex, and homosexuality and extra-marital sex.

Tyler-Moore found less success in the 1980s, starring in a series of short-lived shows that included forgotten names such as The Mary Tyler Moore Hour, Anne McGuire and The Dragon. However, she found more success on Broadway, performing in successful shows such as Whose Life Is It Anyway (1980), and Sweet Sue (1987).

Film roles for Tyler-Moore include "Thoroughly Modern Millie" (1967), and "Ordinary People," which earned her an Oscar nomination for Best Actress in 1980.

Moore was diagnosed with type 1 diabetes at age 33, and it led her to extensive charity work with the JDRF, or former Juvenile Diabetes Research Foundation, which helps raise funds and awareness for the disease.