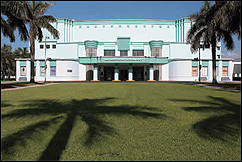 MIAMI BEACH, FL (CelebrityAccess MediaWire) — Anschutz Entertainment Group has reportedly become involved in negations with the city of Miami Beach over the Jackie Gleason Theater, warning officials that Clear Channel’s plan to renovate the venue into a permanent Cirque du Soleil facility would not be economically viable.

AEG plans to propose turning the venue into a home for rock and pop acts, and plans to put on 150 events per year, using no taxpayer money to do so, according to the Miami Herald.

The plan proposed by Cirque could also require as much as $80 million in public funding, according to a memo by Miami Beach Assistant City Manager Hilda Fernandez.

AEG has promised to schedule a variety of live acts, primarily appealing to local residents, rather than visitors to the city.

The city is somewhat unsure of both plans, pointing out that the Gleason already loses about $1 million a year as a performance venue, even before most of its main acts move to Miami-Dade’s new Performing Arts Center.

Fernandez, after meeting with AEG Chief Executive Brandon Phillips, pointed out that 150 events per year is similar to what the Gleason did at it’s peak – while still losing money.

“The bigger question is…how it can compete with two other arenas, and two new performing arts facilities,” Fernandez asked the paper. It’s programs, she said, “wouldn’t necessarily be something that would drive tourism or add and iconic entertainment venue,” as Cirque’s plan would.

The city commission plans to discuss AEG’s proposal as early as this week, to see whether it is worth reviewing the city’s plan with Cirque. –by CelebrityAccess Staff Writers