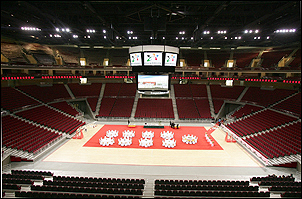 LOS ANGELES (CelebrityAccess MediaWire) — AEG is looking to springboard from their success with the 2008 Olympics into a broader involvment in the Chinese market with an eye towards investing more than $100 million there in the next 5 years.

The first step for AEG will be to secure a naming rights partner for the Wukesong Arena in Beijing. The Wukesong is an 18,000 seat American-style basketball arena built in partnership with the American National Basketball Association for the 2008 Olympic Games. AEG's president Tim Leiweke told the Los Angeles Times that he thinks a naming rights deal should be worth a cool $100 million. If Leiweke's estimation is correct however, that will be just the tip of the iceberg for AEG who hope to develop as many as a dozen major arenas in the Asian nation.

"Our highest priority is Asia," Leiweke told the LA Times and this comment does not appear to be mere lip service. Leiweke and his cohort have been racking up the frequent flyer miles as they visited a number of Chinese cities such as Nanjing and Qingdao, considered as possible locations for future arenas, the LA Times reported. Dozens of AEG execs also were in force in Beijing during the Olympics, meeting extensively with Government officials, sponsors and representatives from Chinese sports federations on possible future deals.

Still, at present, AEG only has 12 employees in China and before the firm can go nationwide, they will need to make good at Wukesong now that the Olympics are over. Experts believe that AEG and the NBA will need to to be putting butts in seats for at least 100 days a year if the arena is to be sufficiently attractive for the level of naming rights they seeking for the venue. China has proved quite receptive to basketball and a full season of with a CBA (Chinese Basketball Association) team would serve well in this regard, buttressed by exposition games featuring top-level American basketball players. Leiweke sees other sporting events and musical concerts to thrown into the mix as well.

China is a fertile market for expansion in professional sports. According to the L.A. Times, spending on sporting events accounts for approximately 3% of the economy of western nations but a mere .02 to .03 percent of China's economy. AEG will need to overcome significant challenges before they can capitalize on this under-served market however as China has few widely-recognized professional sports teams that operate under "market" rules and the strong presence of the Chinese government's Sports Bureau which exercises deep influence in the Asian nation's sports world. – CelebrityAccess Staff Writers