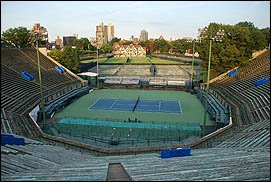 NEW YORK (CelebrityAccess) — Billboard is reporting that AEG and their Madison House subsidiary have secured an exclusive deal with Forest Hills Stadium in Queens to present 15 to 20 shows a year at the 13,000-capacity outdoor tennis venue.

Included in the agreement are an AEG-led renovation of the stadium's facilities, including its concourse, as well as seating, concessions and VIP areas.

The exclusive booking agreement expands on a previous relationship that started four years ago with a Mumford & Sons concert at Forest Hills, Billboard said.

Terms of the deal weren't released, but Madison House's Mike Luba told Billboard that the agreement extends past 2030 and that the deal will see the venue serve as the summer home for the New York Pops.

The move extends AEG's presence in the market and news of the agreement comes just a couple of weeks after the promoter and venue management company announced a tie-up with New York-based promoter Bowery Presents. – Staff Writers