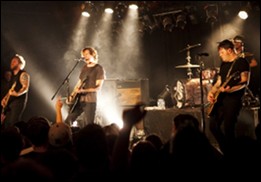 NEW YORK (CelebrityAccess MediaWire) — In order to raise awareness and additional funds for victims of the recent tornado and storms that devastated the Southern United States, Against Me! are auctioning off a signed bass.

The Gainesville band will auction off a brand new Roger Waters signature Fender Precision bass signed by all members of the band.

Working in conjunction with Fender and hosting the auction on their website, Against Me! will be donating 100% of the funds received from the winning bid to the Alabama Red Cross and their continued relief efforts.

Andrew Seward, bassist for Against Me! and former Alabama resident, said the following:

"I grew up in Huntsville, Alabama – my parents still live there and my brother and sister-in-law live in Birmingham. I vividly remember when I was in 5th grade and a tornado came ripping through Huntsville during rush hour. Fortunately, my brother and I were at home with my mom. I remember her rushing us into the downstairs bathroom and making us get in the tub. The tornado didn't hit us but it hit about two miles away destroying a grocery store and shopping center. I remember Huntsville being on the national news and how huge the tornado seemed. Now the tornado from my youth seems so small compared to the twisters I have seen on television in the past weeks. The images are horrifying. Our hearts go out to all those who have lost so much."