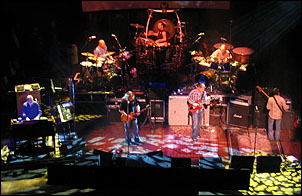 NEW YORK (CelebrityAccess MediaWire) — The Allman Brothers have added an additional show to their annual stand at the Beacon Theatre in New York City. The newly added show, on April 8th brings this year's run to 15 shows total, 14 of which have sold out. Tickets for the final date went on sale Wednesday.

The Allmans have been doing a run at the Beacon since 1989, performing over 180 times. Tickets for the Beacon shows–which run from March 22 through April 7–will go on sale Saturday, January 6 at 9:00 AM Eastern.

There are also plans to make each show available to fans live via a high-definition multi-camera stereo webcast. Although still in the theoretical stage, the goal is to offer subscribers video and audio of all the shows, as well as access to web-cams set up in various venues throughout the country.

The Allmans are also planning an extended tour with 25 shows tentatively scheduled for August and early September. – CelebrityAccess Staff Writers